The following is an overview of 2005 Delta Chi Chapter History.

Delta Chi Sends Two Brothers to the First Ever SPARK

The SPARK Leadership Academy’s pilot program was hosted at Bradford Woods, Indiana University’s Outdoor Center. Jeff Samuels and Stella Maher both decided to go to see what the leadership seminar was all about and support President Kara Maginnes on her new initiative. Arriving at Bradford Woods on Friday, March 18th 2005, everyone was separated into gold and purple groups where they began their leadership training. The gold group was led by National Secretary Brittany Bodart and the purple group was lead by Senior Vice President Lisa Ambrosia Howard. The first night of the program all the participants discussed what it means to be a leader and what they felt the qualities of a leader are. They also spent some time around a campfire getting to know each other. During the first full day of training everyone spent most of the time outside utilizing ropes courses and other team-building activities. In the late afternoon the two groups came back together to perform a large group exercise. After the exercise participants were separated back into their purple and gold groups to put together skits about their experiences over the weekend. The skits were performed for everyone in the meeting hall and the last night was spent together at Bradford Woods. Early Sunday morning everyone began to go their separate ways back to their schools and to tell their chapters of the wonderful experience that was SPARK Leadership Academy. 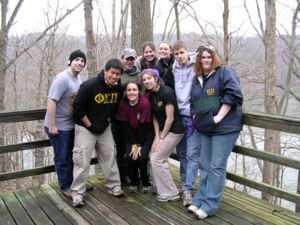 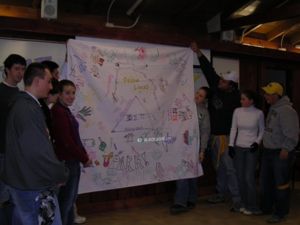 In the spring of 2005, the Delta Chi Chapter began their unveiling in the ICR community with attending both Omicron Chapter Jell-O Wrestling and Alpha Epsilon's date party, sending a record seven brothers to each. Both these events signaled the beginning of a strong semester of ICR attendance. The weekend at Omicron started with some ice breakers, including the PSP favorite "Never Have I Ever" where some interesting and scandalous facts about our Omicron brothers were divulged. The following day, Brandon Fishman made his debut as the first Delta Chi ICR Jell-O wrestler while wearing a youth small spandex GI Joe costume and emerged victorious! Afterward, the Delta Chi brothers did some high quality bonding with their Omicron brothers at the after party bash. This event marked the kindling of wide spread inter-chapter interest and the beginning of consistent attendance at ICR events for the chapter.

The Alpha Epsilon Chapter Hawaiian themed date party was an exciting evening of dancing, and bonding with our brothers from West Chester. Overall, the evening was wonderful, and the Delta Chi Chapter won a sand and sea shell filled martini glass award for having the most inter-chapter brothers in attendance. Overall, the event led to an improved relationship with the Alpha Epsilon Chapter and continued the semester’s ICR momentum that would proceed into the following weekend’s Alpha Beta Volleyball extravaganza.

On Saturday, the tournament started around 11:00am. There were four teams from our chapter competing, and everyone cheered for the team playing. Although they put in a great effort, two of the teams got knocked out in the first round. However, the other two teams, including the Stallions, who were dressed in matching uniforms of yellow shorts, black and white t-shirts with their logo, and bandannas, made it further into the tournament. The Stallions made it to the semi-finals, while the other remaining team was defeated in a close match in the second round. Even with the help of the screaming Delta Chi fans, obnoxious cheers before the game, and high intensity, the Stallions were unable to defeat their opponent and finished the tournament tied for third place out of 32 teams. Everyone was disappointed with the loss, but had a great time playing and cheering all day and went home with smiles on their faces.

Saturday night at the hotel was the location of the superhero dance party. Everyone dressed up in costumes, ranging from Ninja Turtles to the Ambiguously Gay Duo. The party was a hit and everyone had a great time there. Awards were given out at the end of the night for Best Costume, Most Spirited Chapter, and others. To no surprise to the Delta Chi attendees, who were hoping for the award, our chapter took home the Most Spirited Chapter award for our cheering, uniforms, and good sportsmanship at the volleyball tournament earlier in the day. After the dance party was over, brothers and initiates hung out at the hotel with brothers from other chapters. Everyone that attended Alpha Beta Volleyball would agree that it was a fabulous time and look forward to going back next year, next time to win the tournament! 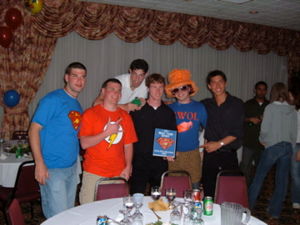 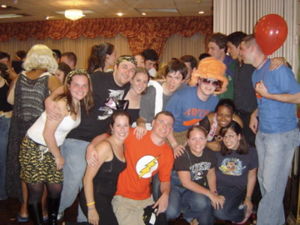 The requirements committee was created in order to try and change the way our event requirements (and their punishments) worked. The committee started out by looking at the old requirements and deciding what we liked and what we didn’t like about them. We then continued by looking into other ways we could structure the requirements and motivator systems. The first amendment that was proposed was to give people another option when they did not fulfill their event requirements. It was called “miss an event, plan an event” and it gives the person an option to plan an event of the type that was missed instead of paying a motivator. This was to make it so they would have the opportunity to plan an event they would rather go to the following semester. This amendment passed and is now part of our operating policies. The second amendment that was proposed was to make it so event attendance was taken based on a point system (this amendment amended both the bylaws and the operating policies). The reason for this new system was because people would go to long events, like Habitat for Humanity, and get the same amount of credit as someone who donated a pack of pens for a drive. In order to make this fair, a person needed six credits in each area of the required events. They would then be awarded one point for drives or events less than one hour, two points for parties or events between one and three hours, and three points for events greater in length than three hours. This amendment failed when it was brought up to the chapter so it will be up to brothers in the future to try and resolve these issues. The following semester a similar amendment was brought up having more of the brothers input. The amendment passed with the following requirements 4 Service, Social, Scholarship, and Elective credits, 4 Rush events and 2 fundraising events where a credit is defined as 1 hours of an event.

The Delta Chi Chapter has been working hard for the past year to increase its national presence, in part by attending more national and inter-chapter events. This summer, seven Delta Chi brothers attended Grand Chapter in Pittsburgh, Pennsylvania from August 4-7, including delegate Matt Lapovsky, alternate Ryan Templin, new brother David Freund, and alumni Rachel Flink, Stella Maher, Angela Rizzo and Jeff Samuels. For many, it was their first Grand Chapter or even first national event. It was a weekend filled with Robert’s Rules, legislative debate, and of course, meeting with brothers from across the country.

Eight brothers made the trip down to Philadelphia on September 17, 2005 to play in an ultimate frisbee tournament hosted by Drexel (Gamma Xi), Temple (Alpha Lambda), and West Chester (Alpha Epsilon). The tournament was a fundraiser for Hopes and Dreams, a walk for Autism. There were a total of four teams who played the round robin, double elimination tournament. Delta Chi took the first two games with ease and made it to the finals. Although they lost the first game, since they needed two losses to be out, they played an additional game and won with only a few seconds remaining.

After the tournament, everyone went to Pat’s for some original Philly Cheese steaks, compliments of Pat’s, followed by the Delta Chi Brothers walking around South Street for a few hours. Overall, the weekend was a great time, as usual.

Brothers at Pat's for some Cheese steaks.

The Public Relations Committee strove this semester to involve all the members of the Delta Chi family, including brothers’ parents and siblings. The first Phi Sigma Pi Parents’ Weekend Tailgate was held on November 5, 2005. Planning for the tailgate began at the very start of the semester, as invitation designs were brainstormed and addresses compiled. The brotherhood voted on an invitation which the PR committee then mailed to every parent. The committee spent the remainder of the months prior to the tailgate securing a location, supplies, and of course, tons of food. On the day of the tailgate, over twenty-five brothers, a few initiates, and their families gathered at Goodman Campus for a morning filled with meet and greet chatter and lots of grilling. Brothers talked with each others’ parents, ate food, and some played Frisbee. The event was a great success, introducing family members to the brotherhood and to the Lehigh tradition of tailgating.

Following the tailgate, most families attended the football game where they watched Lehigh achieve an astounding victory over Georgetown, 46-14. Delta Chi has kept this as a yearly tradition every parents weekend.

The Delta Chi Chapter also sent representatives to 2005 National Convention, held in Atlanta, Georgia, from November 11-13. Attendees were undergrad Jeremy Tallman and alumna Rachel Flink. Unfortunately, circumstances arose at the last minute that prevented other alumni from attending as planned. Friday night included a bazaar, an inflatable obstacle course, an alumni reception, and an official welcome. Saturday’s activities kicked off with breakfast, followed by an assortment of workshops and other official activities.

The highlight of the event was Saturday night’s formal awards dinner and banquet, followed by an after hours poker tournament and dance party. It was at this awards ceremony that the Delta Chi Chapter received the Clarence O. Williams Most Improved New Chapter Award, a long anticipated honor. Both attendees had a fantastic time, meeting many other brothers and making connections from all over the country. 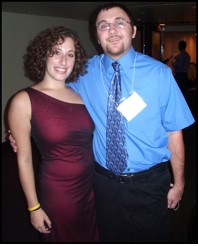 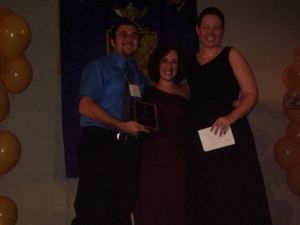