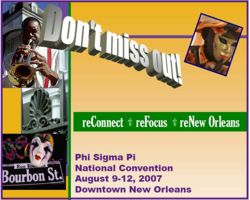 An alternative break will be held from January 8-12, 2008 in Phoenix, Arizona for up to 30 brothers. The team will work in Teach For America schools in Phoenix, providing whatever service is required by the schools. Applications are available on the National website and are due by September 30, 2007.

Jeffrey L. Johnson and his wife Kim announced the establishment of this fund to the Brotherhood Saturday, August 11. This fund was created to provide financial support for:

Jeff and Kim Johnson personally pledged an initial $5,000 donation, the largest single donation in Phi Sigma Pi's history. They also pledged an additional $5,000 per year for nine additional years, based on stipulations of continued growth for the fraternity. The Johnsons also challenged Convention attendees to pledge $2,500 the day the fund was announced and promised to match the $2,500 if the challenge was met. Convention attendees pledged over $13,000, for a combined total of over $20,000 in gifts and pledges the day the fund was announced, leading to the fund becoming fully vested.

Vice President of Membership Development Patrick Herron unveiled a new incentive plan designed to to recognize chapters and award them for long term membership development planning. The plan groups chapters into two classifications: those with 70+ members and those with under 70 members. Each classification has a different recruitment target-- 150% annual growth in membership for chapters under the 70 member mark and a sustained membership level for chapters over 70 members. Chapters that meet their recruitment target will be rewarded with a voucher for one free registration to National Convention. Chapters that do not meet their target will not be penalized in any way. The plan is being implemented for the 2007 calendar year.

The Lamp of Knowledge Fund was passed by the National Council in July 2007 and formally chartered into existence during Grand Chapter business in August 2007. The purpose of the fund is to increase member participation in leadership training, national events, and philanthropic activity specifically including Teach For America. Disbursement of monies from the fund will be evaluated by the National Council each year by February 15th. The immediate intention of the National Council is to use these funds to improve training and attendance at National Convention, and to increase grants for Phi Sigma Pi alumni that join the Teach For America corps.

The Grand Chapter held a special election to fill the vacancy in the position of Vice President of Alumni Development created when Jonah Goodman was elected National President. The nominees were;

The following awards were presented at the Awards Banquet (in order of presentation):