Alisha Kellam (born 29 September 1989) is an Alumna of Alpha Sigma Chapter (ΑΣ 244) at Virginia Commonwealth University, and she is awesome.

Alisha Kellam decided to attend Virginia Commonwealth University in the fall of 2007. In the spring of her freshman year she discovered Phi Sigma Pi through her great friend Kayla Newberg, who made her come out during rush week. She was inducted on April 20, 2008 as a member of Upsilon class along with 8 other amazing individuals, after a successful Initiate period, during which she served as chair of the Initiate Fundraising Committee. Ever since then it has been magic and rainbows. 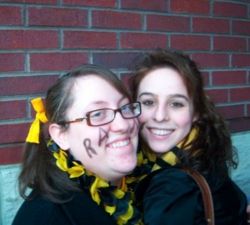 Alisha has served in a number of Chair positions during her time at Alpha Sigma. In Spring 2009 she was Scholarship chair, where she was responsible for the planning of a number of exciting events including a "Tie-Dye" event that was designed to represent all three legs of the Tripod by accepting donations for the homeless, teaching Brothers and other attendees how to tie-dye, and adding a social element of refreshments. In Fall 2009, Alisha served as the Social Chair, where she held an incredibly successful 70's roller disco event, a powder puff game, and the first Alpha Sigma Chapter pool party, which has now become an event held every semester.

In Spring 2010, she served on the Regional Conference committee as unofficial co-chair with Natalie Vazquez. The two planned the first Regional Conference that was ever held at Alpha Sigma Chapter. During this time, Alisha also stepped up to become the Vice President of the chapter for an interim spring semester term. She served as the Semi-Formal Chair for Alpha Sigma in Fall 2010.