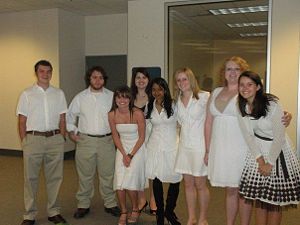 Anu wanted to join when the chapter first started, but had other financial obligations. Later, when she did join she was really interested because her best friend, Ruru Ewubare was a Brother and Anu wanted to be her Little. Now, she loves being a part of the fraternity and all of her wonderful Brothers!

Anu's Big Brother is Ruru Ewubare, who is currently a senior at ETSU majoring in economics with a minor in finance.

Anu can be reached via email at: zasc22@goldmail.etsu.edu

Anu happens to be the only South Indian from Kerala that goes to ETSU and possibly the only Christian Indian on Campus.