Arnie decided to attend the University of Maryland after looking at several schools in the D.C. area, due to his interest in studying political science. Returning for his second semester at UMD, Arnie was looking for something new to try and received a letter from Phi Sigma Pi among a package of mail forwarded from home. He was pinned as one of the 16 Alpha Mus, or "Mu Crew," in the Spring of 2005 and all 16 were inducted that semester. Arnie actually missed his class's pinning and first roadtrip because of previously scheduled family plans, occurrences which would become very uncharacteristic in his time as a Brother. 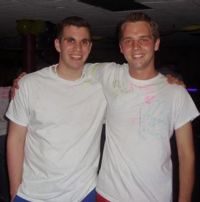 During his first semester as a Brother, Arnie served as the chapter's webmaster, reinventing the website with a new format, as well as new features including a page with Brothers' favorite websites. He also made the position more visible during chapter meetings by providing weekly tips for computer and internet use to the chapter. The following semester, Arnie served as Inter-Chapter Relations co-chair, along with Steve Goodstadt. This role would prove formative in his role as a Brother. He worked to plan the 2006 Alpha Beta Volleyball weekend, with a video game theme. At the time, it was one of the largest and most profitable for the chapter.

In May 2006, Alpha Beta's president, Andrew Cluster, graduated in the middle of his term, and many older, active Brothers were abroad at the time. This provided Arnie the opportunity to step up and serve as President. He became the youngest president the chapter had ever had at the time, and would go on to serve longer than any president in Alpha Beta history, holding the position from May 2006 through December 2007. During this time the chapter saw immense growth and renewed activity, growing in size to reach its cap of 70 Brothers, incorporating leadership development into pre-semester planning, increasing the use of committees, as well as coordination among chairs, submitting two successful amendments to Grand Chapter, strengthening enforcement of the chapter attendance policy, improved assessment and implementation of chapter goals, giving out the first chapter awards in several years, and the planning of Alpha Beta's first golf tournament to support Teach For America. 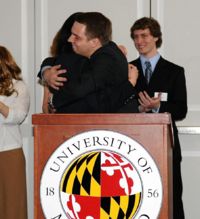 Arnie's time as president culminated in work that would lead to a logical transition into his final undergraduate role in Alpha Beta, that of alumni relations chair. During the last semester of Arnie's term as president, plans began for a massive celebration of the chapter's 20th anniversary in March 2008. This included a massive fundraising effort which endowed the chapter's Razzano Tripod Scholarship, as well as installing a permanent pillar on campus emblazoned with the greek letters Phi Sigma Pi. As alumni chair, Arnie planned the 20th Founder's Day banquet, complete with a luncheon, speeches from Alpha Beta founder Michael McQueney, national president Jonah Goodman, representatives from Teach For America and Brothers involved in Maryland's alternative spring break program. The program brought together over 100 Alpha Beta alumni and over 50 undergraduate Brothers, as well as all of the Spring 2008 initiates. The culmination of the luncheon was the dedication of the Phi Sigma Pi pillar at the University of Maryland Alumni Center, followed by casual alumni and undergraduate celebrations. The 20th Founder's Day celebration was central to Alpha Beta's win of the 2008 Chance Alumni Award.

Aside from the 20th Founder's Day, Arnie's time as alumni relations chair saw the return of "Alumni Bits", Alpha Beta's alumni newsletter. He also planned more varied alumni events, including a career panel and picnic for alumni and their families on McKeldin Mall, the central open area of the Maryland Campus.

At the end of his last semester as an undergraduate, Arnie was awarded the Chapter Service Key. 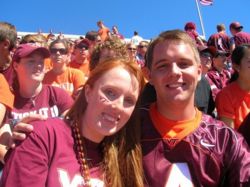 Before deciding to attend the University of Maryland, Arnie was a supporter of Virginia Tech football. This was only solidified when three close friends from high school decided to attend Virginia Tech and he gained personal ties to the school. During his early time as an initiate and a Brother, Arnie was introduced by older AB Brothers and alumni to friends they had made in the Alpha Rho Chapter, including at the 2005 Alpha Rho/Beta Delta Founders' Day celebration in Blacksburg, but he noticed the connections between Alpha Beta and Alpha Rho were weakening as those older Brothers graduated.

During the Summer of 2006 Arnie met two Brothers from Alpha Rho at the 2006 Grand Chapter Conference in Kansas City who would become close friends. He kept in touch with them afterwards, and visited Blacksburg for a football game that September (VT-36, Duke-0). Arnie met many members of the chapter that weekend, and would see many of them and meet more at that fall's Alpha Eta Hope Bowl, 2006 National Convention in Washington, D.C., and Alpha Rho/Beta Delta Founders' Day in Raleigh, North Carolina.

Arnie continued to keep in touch with a handful of Alpha Rho Brothers, but his connection with the chapter would be tempered under tragic circumstances. When violence struck the Virginia Tech campus on April 16, 2007, Arnie had a very personal reaction to the events, e-mailing the chapter president and other close friends in Alpha Rho, sending an e-mail to the national list serve recounting fond memories of Blacksburg and expressing support on behalf of the Alpha Beta Chapter, as well as organizing the Alpha Beta undergraduate and alumni response to the tragedy. He felt an obligation to exercise personal control over every aspect of the chapter's response during this unspeakably painful time for his close friends and Brothers. Alpha Beta Volleyball was the following weekend. Arnie led the attendees in a moment of silence, and organized the production of orange and maroon ribbons for the tournament, along with collecting donations which would be used for a specific act of fellowship by the Alpha Beta Chapter. That eventually took the form of providing food for a chapter tailgate before the 2007 Virginia Tech vs. Boston College game, the night before Alpha Rho/Beta Delta Founder's Day 2007 began. Unfortunately this fellowship did not bring the Hokies luck on the football field against BC. 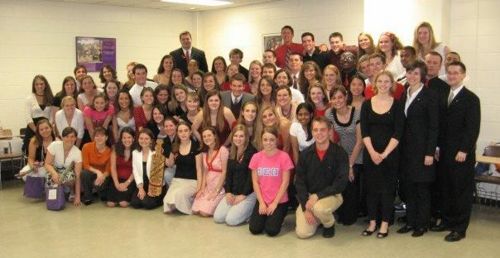 Arnie (kneeling, front right) with the Alpha Rho Chapter 10 days after the tragedy that claimed 32 victims on the Virginia Tech campus.

The week after the tragedy Arnie was finally able to travel to Blacksburg, and comfort his friends and Brothers in person. He attended the induction of the Alpha Eta class, including fallen initiate Erin Peterson. He was comforted, but not surprised, to see the strength of the Alpha Rho Chapter and the entire Virginia Tech community in the wake of the tragedy. Over the next year, Arnie would travel to Blacksburg nearly a dozen times, attending football games and enjoying fun times while comforting his Brothers during the university's recovery. He attended both the dedication of the April 16th memorial on the Virginia Tech Drillfield in August 2007, as well as remembrances across campus on the first anniversary of the tragedy, April 16, 2008.

On March 16, 2008 the Alpha Rho Chapter voted to induct Arnie as an honorary member. Brothers were strongly warned to keep this a secret to Arnie over the next few weeks, especially during two trips he would make to Blacksburg. The second of those was for Alpha Rho's annual alumni banquet on April 5, 2008. During the program that evening, Alumni Relations officer Sara Stevens and Brother Becca Bullard announced through a creative round of "20 Questions" that Arnie was indeed awarded honorary membership by the chapter. He was given a set of orange and maroon letters to commemorate the occasion. Two weeks later, after several days in Blacksburg commmemorating the first anniversary of the April 16th tragedy, Arnie was inducted into the Alpha Rho Chapter on April 17, 2008. Two Alpha Beta Brothers, Kim Metzinger and Jillian Bleggi, were in attendance.

Arnie currently serves as an alumni advisor for the Alpha Beta Chapter. He works for National Public Radio in Washington, D.C., and resides in Northern Virginia. 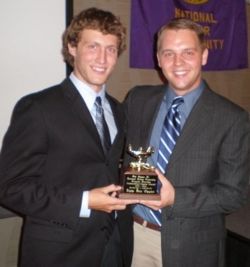 Arnie and 2008 Alpha Beta president Scott Malecki pose with the chapter's Torchia award for the 2007-2008 school year at the 2008 National Convention in Nashville, Tennessee.