From PhiSigmaPiWiki
Revision as of 17:41, 21 April 2014 by PavvyPower (talk | contribs) (new ting)
(diff) ← Older revision | Latest revision (diff) | Newer revision → (diff)
Jump to:navigation, search
This article is a stub. You can help PhiSigmaPiWiki by expanding it. For an example of a well developed Chapter Page see Alpha Rho Chapter and for a well developed Bio Page see Pete Gingrich for ideas.

Delta Mu Chapter (Founded 10 May 2000) is located at the University of Maine in Orono, Maine. The Chapter was founded by Basant Dietry and is a member of the Northeast Region. 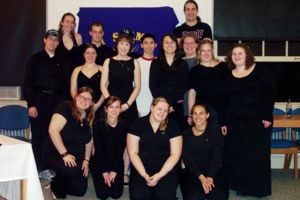 In the spring of 2000, a graduate student named Basant Dimetry desired to start a chapter of Phi Sigma Pi at the University of Maine in Orono. There had been a chapter at her undergraduate college, Georgia Southern University, which had been a large part of her college life.

As of April 2014 the Delta Mu chapter is Twenty-five (25) members strong, after inducting the the Alpha Delta Class of 10 Brothers. The current Alumni Adviser is Kelsey Flynn of the Phi Class.

The Chapter recently sent 5 (five) Brothers and the Alumni Adviser to the Northeastern Regional Conference (NERC). Our most sent to any outside of UMaine event.

The official mascot of the Delta Mu Chapter is the Purple Cow. The Chapter wanted a mascot and since our Chapter is Delta Mu (Moo) we figured it made sense to have a cow. To incorporate the Fraternity's colors we made the cow purple with a gold and purple tail. The Purple Cow is awarded weekly by the Awards and Scholarship Committee and the Brotherhood to a Brother whom they believe is deserving of the award that week.

In the Fall Semester of 2013 we, the Delta Mu Chapter, changed our chapter bylaws to have our Executive Board positions run on a calendar year system as opposed to a academic year system. This is with the exception of the Regional Delegate position, which runs on the academic system. We made this decision so that our officers carry over from Spring to Fall, and are stable and strong for the Fall Rush season. We have found this to be successful in that our seniors are able to lead, and then take a step back for their final semester. This method cuts down on their stress and responsibilities, and also allows for a semester of supervision and training between the old officer and the successor.

Once a month cooking at Ronald McDonald House.