Emily C. Specchio (3 September 1984 - 15 May 2006) was an Alumna of Alpha Rho Chapter (ΑΡ 602) at Virginia Tech. Emily passed away suddenly and tragically due to a brain aneurysm, shortly after graduating in May of 2006.

Emily enrolled at Virginia Tech in Fall 2002 after graduating from Mendham High School in Chester, New Jersey the previous Spring. As a sophomore, she rushed Phi Sigma Pi in Spring 2004. After a successful Initiation period, Emily was Inducted into the Chapter with the Alpha Alpha Initiate Class in April of that year. 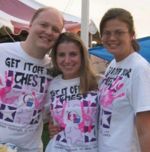 Emily (center) at Relay for Life

Emily was very active during her time as an undergraduate and could always be found at fraternity events with a smile on her face. She served as Alpha Rho's Executive Assistant in Fall 2005 and was active in helping plan and organize many chapter events, including serving as captain of the Alpha Rho Relay for Life team in Spring 2006. Under her leadership, the team raised nearly $5,000, placing it as one of the top three fundraising student organizations at the Virginia Tech Relay for Life event that year. In addition, Emily helped to coordinate a weekly mentorship program for first graders at Gilbert Linkous Elementary School.

Outside of Phi Sigma Pi, Emily enriched her college experience by spending the spring semester of her junior year in Lugano, Switzerland as part of Virginia Tech's Study Abroad program. Furthermore, she demonstrated her willingness to serve others by participating in two mission trips to the Dominican Republic during her time in college.

Emily was awarded the Alpha Rho Tripod Scholarship in March 2006 at Alpha Rho's annual Alumni Banquet in recognition of her excellence in all three legs of the tripod.

This endowed Virginia Tech scholarship fund was created by Emily's family and friends to honor her spirit and memory. The scholarship was endowed in just over two months, in which time over $50,000 of donations were received. As of Fall 2007, the endowment had reached $77,000. The initial scholarship was awarded in Spring 2007 and continues to be awarded annually to outstanding Virginia Tech students studying abroad in Lugano, Switzerland, with special preference for Marketing Majors or Alpha Rho Brothers.

A memorial bench was installed by Emily's family at the duckpond on the Virginia Tech campus. The duckpond was one of Emily's favorite places on campus and is the official Adopt-A-Spot of Alpha Rho. The bench includes a plaque displaying one of Emily's life mantra's: "Embrace that which defines you."

Beginning in Spring 2007, the bench was added to the Alpha Rho Chapter History Appreciation List.

This annual Alpha Rho Chapter scholarship is presented each spring an Alpha Rho Brother who exemplifies all three legs of the tripod. First awarded in 1997, it was renamed in Emily's honor in April 2009, in remembrance of Emily's many contributions to the Chapter and her receipt of the scholarship in 2006.

The Emily C. Specchio Foundation was organized in 2007 by her family as a way to celebrate the life of Emily by following her inspirational lead in continuing to support charitable organizations close to her heart.

On May 15, 2007, the one year anniversary of Emily's death, the Foundation held a "Night with an Angel" benefit banquet and silent auction. The event raised $31,300. The proceeds benefited the following causes: Emily's Virginia Tech Memorial Scholarship, the Foundation for Peace, College of Saint Elizabeth, the Hokie Spirit Memorial Fund, and the Emily C. Specchio Outstanding Dietetic Intern Award at Montclair State University.

As a tribute to Emily, Alpha Rho Chapter held the Emily C. Specchio Dance-A-Thon as a charity fundraiser in Blacksburg on March 31, 2007, raising $2,358. The proceeds were donated to Teach For America in Emily's name.

Emily's Big Brother is Graham Currin, who is now an Alumnus.