Gamma Phi Chapter (Founded 26 February 1998) is located at University of Oklahoma in Norman, Oklahoma. The Chapter was founded by Gamma Pi alum Katie Goddard and is a member of the Great Plains Region. 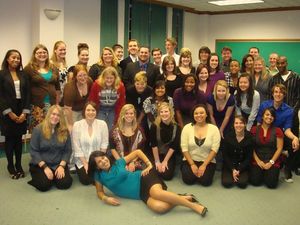 After being a Charter member at Gamma Pi, Katie Goddard moved to Norman, Oklahoma to continue her education. Disappointed that there wasn't a chapter already established at the University of Oklahoma, she set out to start one. After a semester working with Betsy Jaquith, the Director of Expansion at National Headquarters, the initial interest meetings were scheduled.

Monte Eldridge, inducted with the Tau Class on November 30, 2007, was the third Honorary Brother of the Gamma Phi Chapter.

The Scorpion is the official Gamma Phi Chapter mascot. Dr. Gaffin is famous for his study and research on scorpions. While he was advisor, he gifted the chapter with a scorpion. The chapter lovingly calls their mascot "R.T." which is short for "Road Trip." R.T. travels with the Gamma Phi Brothers on all their road trips to ensure a safe, ticket-free travel.

Gamma Phi celebrates the Chapter's founding on a weekend near February 26.