Gamma Upsilon Chapter (Founded 24 February 1998) is located at the University of Kentucky in Lexington, Kentucky. The Chapter was founded by Kathryn Conrad and Amy Rice. Gamma Upsilon is a member of the Bluegrass Region. 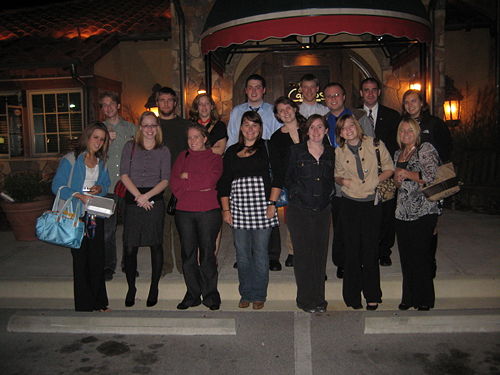 Gamma Upsilon was founded on February 24, 1998 thanks to the hard work of Brothers Kathryn Conrad and Amy Rice. The charter class was made up of 124 brothers. After chartering the chapter the Brothers spent much time building up the chapter and helping establish it on campus.

Gamma Upsilon began as a strong chapter with many brothers and a lot of potential. The chapter began to fluctuate with the number of Brothers in subsequent semesters, though those involved with the fraternity were strong and active in the chapter.

DanceBlue enhances the lives of children and families suffering from childhood cancer through the Golden Matrix Fund, and therefore serves the Bluegrass by assisting those treated at the University of Kentucky Pediatric Oncology Clinic. Furthermore, DanceBlue strives to establish a continued tradition, invoke appreciation and involvement, and ultimately create something greater than oneself.

It is a campus-wide event which we participate in by raising money, planning events and dancing and standing for 24 hours straight. This is a spectacular event that all of our brothers enjoy participating in each year!

With this, Gamma Upsilon Chapter, tries to plan a big event for the spring semester to help raise the required amount of money for all of the chapters dancers to participate. They also go canning in neighborhoods, have sponsor nights at a local restaurant, and many other things to make sure they raise the required $300 per dancer! Gamma Upsilon Chapter had five dancers in 2010.

If you have any questions about this event, would like to attend, or would like to contribute please feel free to email us at pspgammupsilon@gmail.com

Gamma Upsilon celebrates the Chapter's founding on the third weekend in February. The official date is February 24, 1998. It is a weekend of food and fun for all.

Gamma Up Giddy-Up was created in the Spring 2000 semester by Mike Landisman and is the annual event hosted by Gamma Upsilon. Recently moved to the fall, this event showcases what all the "Horse Capital of the World" has to offer. Tailgating and watching the races at Keeneland, bourbon distillery tours, and the annual Ted Daniels Poker Tournament are just a few of the things going on during Giddy Up. Not to mention it's a great time for brothers from all chapters to come together and have a good time.

The 2010 Gamma Up Giddy Up committee is looking to make sure visiting Brothers have a blast at the events. We are going to be keeping some old favorites, like the Ted Daniels Annual Poker Tournament as well as a visit to the beautiful Keeneland. We are looking forward to having many Brothers from across the state as well as the country come and visit with us in October for this exciting annual event! This years theme is "I've fallin' off and can't Giddy Up!!"

Reforest the Bluegrass is a yearly Lexington event in which members of the community come together to plant thousands of baby trees in hopes that in several years the city will have more trees and less pollution. The event takes place on the second or third Saturday of every April.

Gamma Upsilon's mascot is the platypus.

Originally of Alpha Rho Chapter, Ted moved to Lexington, Ky and was made an honorary alum of Gamma Upsilon. He wrote "Brother," one of the two official songs of Phi Sigma Pi. Ted was awarded a Chapter Service Key from the Gamma Upsilon chapter for his great work and help through the years during their Retreat dinner at the end of the 2010 spring semester.

Aaron graduated in Spring 2007 with a degree in Design. He is now a published artist and has a book called Jimmy Platypus and the Good Farmer.