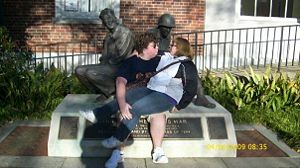 Before Phi Sigma Pi I was just another guy on campus. I wanted to be a part of something larger then myself, and Phi Sigma Pi gave me an opportunity to grow in ways I couldn't have imagined. Several years later and looking back, I wouldn't change a thing.

Jarrod transferred schools in 2009 to pursue his BSN.

Jarrod is a member of the Charter Class so he doesn't have a Big Brother.