Laura Boetefuer (born 07 21 1993) is a Collegiate Member of Tau Chapter (T 1798) at East Carolina University. Laura was inducted as part of the Gamma Delta Initiate Class.

Laura decided to attend ECU for the Fall of 2011 because she fell in love with the beautiful campus. After moving from Pennsylvania, she had a big adjustment to North Carolina and living away from home. The best decision she made of her undergraduate career thus far, was attending Smoker of Phi Sigma Pi in the Spring of 2012. Phi Sigma Pi is a huge part of her life and a great growing experience. ECU would not be the same without her Brothers on campus.

Previously served on Tau Chapter Executive Council as Historian for the 2013-2014 year. She is also served as Alumni History Co-Chair for Fall 2013, after holding the same position during the Spring of 2013. Before Alumni History she served on the Rush/PR committee for the Fall of 2012. 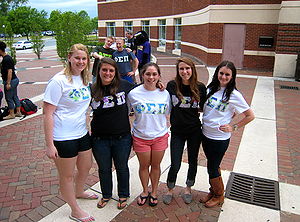 Laura with her Big and Siblings, Spring 2012 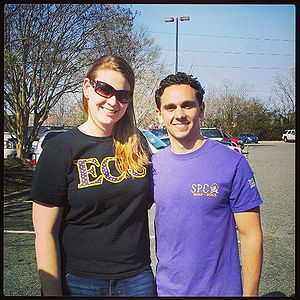 Laura and her Little Chris, Spring 2013