Lauren Nicole Puls joined Phi Sigma Pi in her second semester of college at the Universtiy of North Texas (Go Mean Green!). She found out about Phi Sigma Pi through one of her favorite Brothers - Nick Overbeck. They met through an Underground Dodgeball League that they were both a part of and found out that they are from the same hometown (Small world, huh?)! They instantly clicked and Nick thought it was a great opportunity to invite her to rush Phi Sigma Pi for the Spring 2010 semester. Lauren was so incredibly excited to go through recruitment and she went to almost all of the rush events. Lauren was also really nervous about going through recruitment since she had just been rejected from the Panhellenic sororities that she rushed for. Nonetheless, Lauren was initiated into the Upsilon Initiate Class of Delta Kappa Chapter on February 14, 2010. During the initiate process, Lauren ran for President of her class, but unfortuately did not get the position. Instead, Lauren was extremely active in her Initate Class' Scholarship Committee and she planned the Scholarship event for her class in order to show the Brothers that she was a worthy to become a Brother and would be an incredible asset to Phi Sigma Pi. The Scholarship event included eating dinner at Dick's Last Resort and attending a Spoof of Sherlock Holmes at the Pocket Sandwich Theater. According to a few of the Alumni from Delta Kappa, this was one of the most entertaining events they had ever attended! 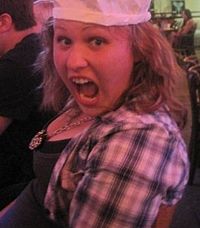