Megan enrolled at Virginia Commonwealth University in the Fall of 2007, after transferring from East Carolina University in Greenville, North Carolina. She graduated from Varina High School in Richmond, Virginia in 2006. In the Fall of her junior year, Megan received a letter from Phi Sigma Pi, and was very interested in this organization that upheld the ideals of scholarship, fellowship, and leadership and it was also a co-ed honors fraternity. After attending the informational meeting, she received a bid and rushed in the Fall of 2008, and after a successfully completing the initiation period, was inducted with the rest of the Phi class on November 16, 2008. 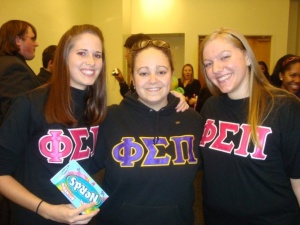 Megan enjoys going shopping and going to the movies and the beach. Other than that, Megan loves to do ballet and attending shows by the Richmond Ballet. Megan enjoys all types of music, especially anything she can dance to.