This article is about the National Headquarters building. For the term used to refer to the collective grouping of the National Council and National Staff, please see the article: National Office. 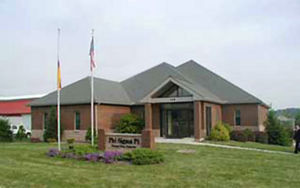 Prior to 1988, Phi Sigma Pi did not have an official Headquarters. Official records were generally kept in the home of the National Treasurer/Secretary, an office held by Members of Sigma Chapter from its creation in 1951 to its dissolution in 1988. By the late eighties, the fraternity had only 6 Active Chapters, but with renewed expansion efforts, the fraternity again began to grow. As more chapters were added, the space required for records and supplies also grew, and the National Council recognized the need for an official headquarters. 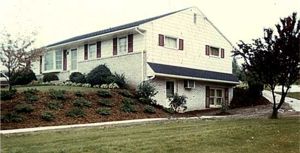 The first National Headquarters was located at 302 E Charlotte Street, Millersville, Pennsylvania, the home of Harley and Sherri Johnson, the parents of then National President Jeff Johnson. In 1988, the National Office consisted of one room in the Johnson's home approximately 150 square feet in size. At that time, the Fraternity had 13 Active Chapters, and Sherri Johnson was hired as the first part-time administrative assistant.

By December of 1989, the fraternity had grown to 18 Active Chapters, and the decision was made to hire a full-time Executive Director. More space was required. The Johnson's allowed Phi Sigma Pi to rent 1,000 square feet of space in the basement of their home, a space that had been converted into a private apartment complete with two large rooms, a kitchen, a bathroom, and a private entrance. This space would serve as the National Headquarters until 1991, when the Johnson family decided to put the house up for sale. 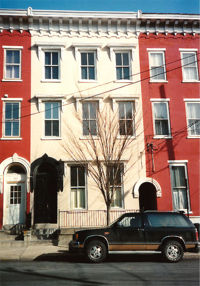 In 1991, Phi Sigma Pi hired a second full-time employee to assist with managing day-to-day operations. Again, more space was needed. With the Johnson's decision to sell their house that same year, the National Council decided to look into purchasing a building. Low mortgage interest rates in the early 90's coupled with a relatively expensive rental market made the idea of real estate investment much more attractive than continuing to lease space. After weeks of searching, the National Council found the Victorian row house at 345 N. Mulberry Street in Lancaster, PA. The 2800 square foot house was already zoned for commercial use and offered plenty of room for growth and storage, including a full basement and a small back yard.

Jeffrey L. Johnson and Kim H. Johnson present the fraternity with a dedication gift for the New National Headquarters. 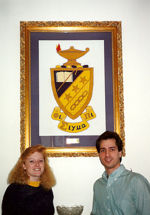 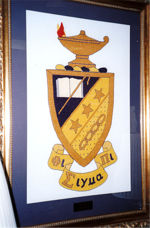 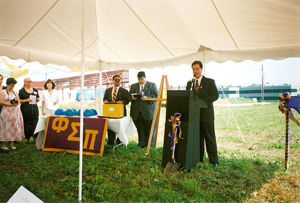 National President Jeffrey Johnson leading the groundbreaking ceremony prior to construction of the National Headquarters building in 1994. 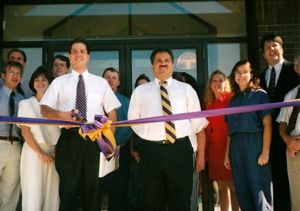 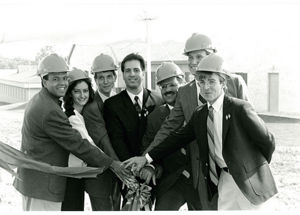 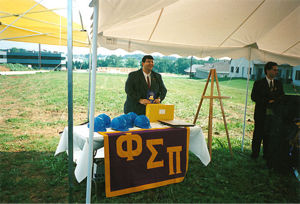 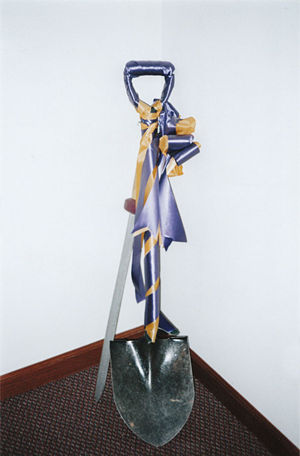 By 1994, the National Staff had grown to five full-time employees, with plans for additional positions to support the rapid growth of Active Chapters. Although the row house headquarters had served the fraternity well, there was no room for expansion at that location. in 1995 the fraternity purchased an acre of land at the Ambassador Circle location to start building a new headquarters. With construction complete a dedication ceremony for the new National Headquarters was held during the summer Grand Chapter Conference. A plaque is hung in the lobby commemorating the achievement.