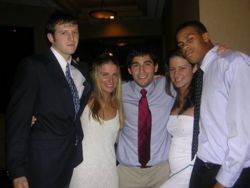 Some Alpha Alphas; Omar in center

Omar enrolled at Virginia Tech in Fall 2002 after graduating from Westfield High School in Chantilly, Virginia. As a sophomore, he rushed Phi Sigma Pi in Spring 2004. Omar received a bid, and after a successful Initiation period, he was Inducted into the Chapter with the Alpha Alpha Initiate Class in April of that year.

Omar graduated from Virginia Tech in May 2006. That summer, Omar was on vacation in Lebanon as war broke out. After 10 days, he finally managed to evacuate the country as official Lebanese Refugee #1584 of the USS Trenton. 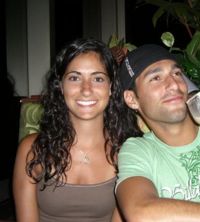 Omar and his sister Reema

On April 16, 2007, Omar's younger sister Reema was tragically killed in the same classroom as Alpha Rho initiate Erin Peterson in the shootings at Virginia Tech that claimed the lives of 32 victims. In the days that followed, Omar appeared frequently on TV in interviews with both local and national media on the Virginia Tech campus. Following that day, Omar became an ardent supporter of gun control, most notably working with organizations, media, and lawmakers to try to close the "Gun Show Loophole" that allows guns to be sold by dealers to anyone without the identification or background checks normally required of all dealers. In this capacity, Omar has appeared frequently in various media outlets including ABC News, CBS News, the Washington Post, and many local news outlets.

Omar currently lives in Arlington, Virginia and works as a real estate agent.

Omar's Big Brother is Erika Spracher, who is now an Alumna.