Difference between revisions of "Tau Chapter"

Tau Chapter (Founded 28 May 1936) is located at East Carolina University in Greenville, North Carolina and is a member of the Mid Atlantic Region. The Chapter was founded when Epsilon Chapter Alumnus Dr. Beecher Flanagan (Ε 2, Τ 12) came to ECU to teach. Tau Chapter is 'one of the most historically successful chapters in the Fraternity.' -Epsilon Wiki 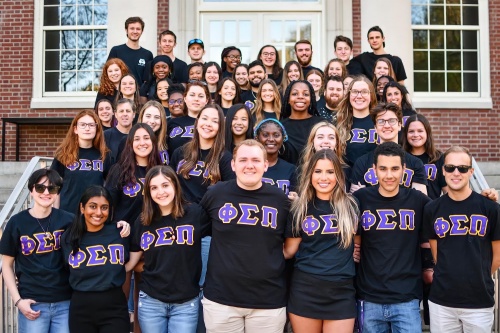 "The Tau Chapter of Phi Sigma Pi, national honorary education fraternity, has as its objective perpetuating the ideals of higher learning and promoting goodwill and fellowship among the men [and women] students on the campus of East Carolina...[University].

Even though membership in the fraternity is not open to all men [or women] students on the campus, they may become eligible by maintaining a high scholastic average and fostering brotherhood with their associates on the campus...

While a student is in college he [or she] derives greater benefits from campus life if there exists within him [or her] the conviction that he [or she] is among friends; that they stand ready to help him [or her] when the need arises. This holds true, too, after one is graduated from college. Phi Sigma Pi offers life membership to alumni, giving its members life-long association they would lose otherwise.

It is the desire of the fraternity to encourage men [and women] students on the campus to become eligible for membership, as Phi Sigma Pi feels that it has something to offer."

Tau Chapter originally began as Tau Sigma Sigma, the first fraternal organization to be chartered at East Carolina University in 1935. Tau Sigma Sigma was founded by Dr. Beecher Flanagan (Epsilon 2, Tau 12) and started as a social/service fraternity for male students. The following year, the group decided to seek affiliation with Phi Sigma Pi under the direction of then President, Bruce Simmons, and Advisor, Dr. Flanagan. The group became Tau Chapter of Phi Sigma Pi and it was mere coincidence that Tau Chapter kept part of its original name. Tau Chapter was installed by Simon S. Shearer on May 28, 1936. All but 3 of the original Tau Sigma Sigma Brothers became Tau Chapter Brothers, most of which were part of the installation of Tau Chapter. Dr. Flanagan continued to serve as the Advisor for Tau Chapter for the next 14 years as well as serving the National Fraternity. This included serving as the National Historian for 7 years during the WWII era. Through his efforts, Tau Chapter was able to remain active during WWII. Kappa was the only other Chapter that remained active during the War.

In 1950, Dr. Richard C. Todd (Sigma 58, Tau 878) came to East Carolina University to teach in the Department of History after turning down the opportunity to serve as the president of High Point College. Dr. Flanagan invited Dr. Todd to a dinner meeting of the Chapter shortly thereafter which led to Dr. Todd assuming the role as Faculty Advisor, a position he held for the next 27 years. Dr. Todd helped lead Tau Chapter, as well as the National Fraternity, into greatness. Along with Joseph Torchia, Dr. Todd is credited with carrying Phi Sigma Pi through turbulent times. The Fraternity would eventually shrink to just six active Chapters, with Tau Chapter being the oldest Chapter to remain continuously active. Tau Chapter remains the oldest Chapter to have never gone inactive.

In 1975, East Carolina University notified Tau Chapter that it was in violation of Title IX. As a professional organization, Tau Chapter would have to either admit eligible females or cease to exist. Two years later, a Constitutional amendment by Tau Chapter allowed the admittance of eligible women into Phi Sigma Pi. Clauda Pennock Todd, wife of Dr. Todd, was inducted into Tau Chapter on December 3, 1977 as the first female honorary Brother to be inducted after the passing of Title IX. Nicknamed “Sweetheart,” Clauda Pennock Todd became an integral part of her husband’s service to the Fraternity. Tau Chapter took the lead among the remaining active Chapters in making the coed transition. 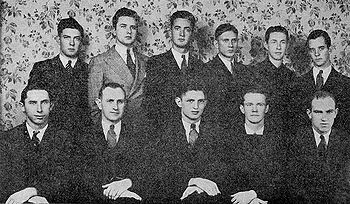 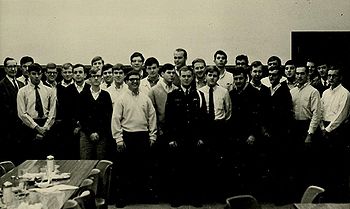 In 1977, Dr. Richard C. Todd retired from East Carolina University. Along with then President Randy Doub, he recruited Dr. Jack W. Thornton as the new Advisor for the Chapter. Dr. Thornton originally came to ECU in 1965 to teach in the Department of Business. He continued the service exemplified by both Dr. Todd and Dr. Flanagan to both Tau Chapter as well as the National Fraternity. It was during this time the pledge process went through several changes to instill more values, bolster involvement, and to add a higher level of seriousness. From here, many of the current traditions of Tau Chapter were born.

Following Dr. Thornton’s term on the National Council, the Fraternity shifted from generally having Advisors leading the Fraternity to active Alumni taking charge. Dr. Thornton served as the Advisor for Tau Chapter for 21 years. Although Dr. Todd retired in 1977, he continued to be active with Tau Chapter until his death in 1993. It wasn’t until Dr. Todd retired that he finally signed Tau’s Rollbook as the last signature in the first book. He was considered a part of the Chapter without having signed the book, however, the Brothers wanted to make it official once Dr. Todd retired. Dr. Thornton and the Brothers knew it was impossible to ever replace Dr. Todd for everything he has done for both Tau Chapter and the National Fraternity. 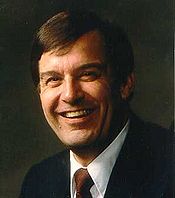 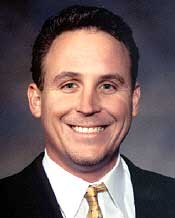 In 1998, Dr. Jack Thornton retired from East Carolina University and the duties of Advisor were passed to Dr. David L. Batts from the Department of Technology Systems. Thanks to Dr. Batts’ efforts while on the National Council, the Fraternity saw its first Alumni Convention in 2005. Dr. Batts continues to follow in the footsteps of Drs. Flanagan, Todd, and Thornton and has served as the Advisor for Tau Chapter for over 10 years.

In 1991, Richard C. Todd and Sweetheart established the Richard Cecil Todd & Clauda Pennock Todd Tripod Scholarship. David Batts was the inaugural recipient of the award in 1993. Since that time, Brothers Amanda Hines, Nicole Gray, and Brittany Bodart have won this prestigious award.

Tau Chapter established an impressive commitment to the Tripod during Dr. Todd's years of guidance and continues to this day. Tau Chapter also remains one of the most outstanding Chapters in the nation, as evidenced by its receiving the Joseph Torchia Outstanding Chapter Award, the most prestigious award a Collegiate Chapter can receive, a total of 34 times since the award was given annually starting in 1966. Tau Chapter also received the Joseph Torchia Outstanding Chapter Award for 21 consecutive years. The record for the longest consecutive streak and most Torchias received belongs to Tau Chapter with no other Chapter coming close. 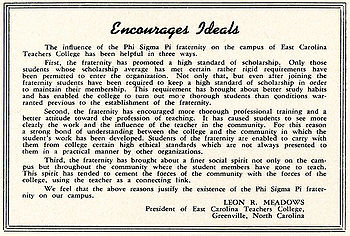 Tau Chapter closely adheres to the Fraternity's principles of Scholarship, Leadership, & Fellowship in all events which are planned. Tau Chapter also focuses closely on service activities and works with organizations such as: Boys and Girls Club, Greenville Fire Department and Relay for Life. 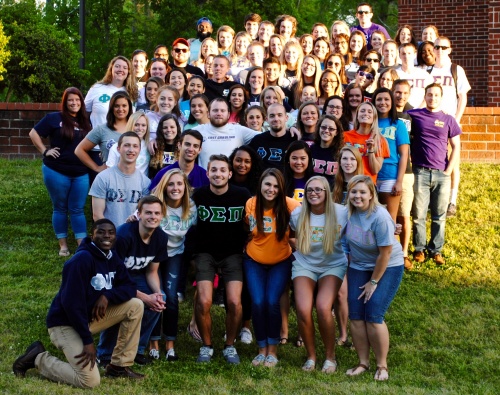 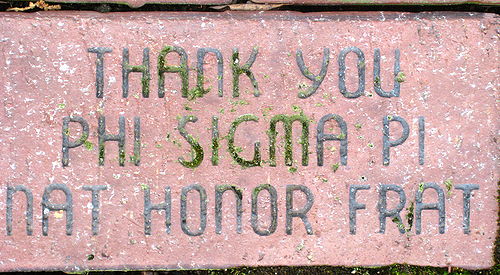 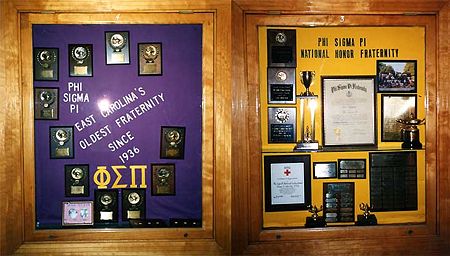 Main Article: List of Tau Chapter Awards from the University and Community