Tom began his freshman year at Georgia Tech in Fall 2005, after graduating from high school in Paramus, NJ. In his sophomore year, he received an email from Phi Sigma Pi inviting him to participate in the founding of a new chapter at Georgia Tech. Tom was excited to be involved in building a new organization on campus, and so he attended the very first info session in September, 2006. He became the colony's first Historian in January, 2007, and took an active role in helping the colony complete the Brotherhood Education Program. Tom was inducted with the Charter Class on April 13th, 2007.

As an undergrad, Tom Fay was a very active member within the chapter. He attended every chapter meeting, executive board meeting, and nearly every event planned by the Chapter. He held several leadership positions, including Historian, ICR Chair, Parliamentarian, and Vice President, and was on multiple committees, including the Fellowship, Fundraising, ICR, and Alumni Committees.

After attending a Spring Formal at the Beta Zeta Chapter and the 2007 National Convention, Tom became very interested in Inter-Chapter Relations and improving his Chapter's bylaws. He invited Brothers at the Alpha Upsilon Chapter to attend Epsilon Theta's Fall semiformal, and encouraged his own Brothers to attend events at neighboring chapters Beta Zeta and Epsilon Nu. In the Spring of 2008, he helped induct Epsilon Nu's Charter Class at Kennesaw State University. He went on to make several more road trips, including the Mid South Regional Conference in 2008 and 2009 and National Convention 2008 and 2009. He also attended several formals, tailgates, and inductions at Beta Zeta, Beta Kappa, and Epsilon Nu.

As Parliamentarian and Vice President, Tom noticed a disconnect between his Chapter's bylaws and the day-to-day operations of the Chapter. He began a massive rewrite of Epsilon Theta's Constitution and Operating Policies, ultimately creating a Bylaws committee to help in the effort. Eventually, Tom became the go-to person in the Chapter for all questions related to bylaws, operating policies and procedures, on both the local and national level.

Tom also pushed to create the Chapter's first end-of-the-semester Retreat, held at Tugaloo State Park, GA, in the Fall of 2009. The event was very successful, and the Chapter agreed to continue the tradition every semester. Tom was also active in the Big/Little program, for a time having the largest family in the Chapter. He took three Littles as an undergrad.

Tom won several superlatives as a Collegiate Member, including Most PSP-Centric, Best Beard, and Most Likely to Have the High Score in Rock Band. After Brother Annie Jordan (nee Staight) made pins with his face printed on them for the Chapter's Trivia team (The Toms), he won Most Likely to be on a Pin. He also received Most Likely to Take Over the World and Most Likely Never to Graduate.

Tom Fay graduated in December, 2009 with a B.S. in Aerospace Engineering. Faced with a declining job market for the space industry, he returned home to continue job-hunting.

After moving home, Tom realized that he could still be active within the Chapter, and provide help and support as an Alumnus, especially as most of the old leadership had graduated or were ineligible to serve as officers. He continued attending weekly Chapter meetings and the Chapter's larger events, such as Induction, Formal, and Retreat. He helped the Bylaws committee continue its amendments and advised the Executive Board on various issues. His advisory role was made official in April, 2010 when the Chapter elected him as Alumni Advisor. He was also honored by the Chapter with the naming of the "Tom 2.0" Most Dedicated Brother award in the Spring of 2010.

He continued his involvement on the national level by attending the 2010 National Convention in Harrisburg, PA.

As a Charter Brother, Tom does not have a Big.

and one Adopted Little: 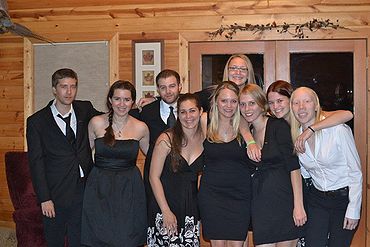 The Fay Family Fall 2012 after Induction 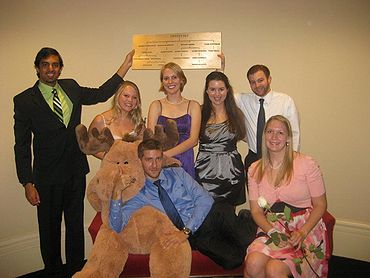 The Fay Family Fall 2012 at the Alumni Banquet