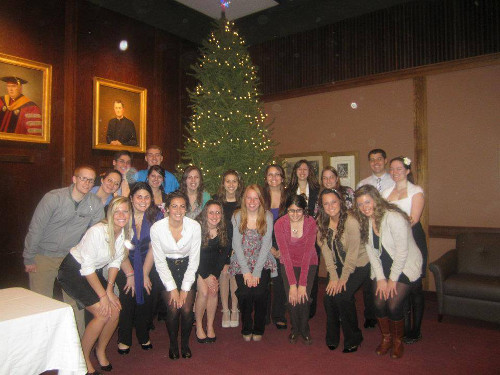 The Alpha Class is an initiate class of Zeta Iota at Saint Joseph's University. There are the first class to actually go through chapter rush events and have initiate events. They started with 20 brothers and ended up with 19 brothers when one brother got expelled for not signing a risk management form which cause the chapter to be placed on probation.

Brothers and Initiates played the gift exchange game White Elephant. Each participant gives a gift. It involves participants swapping a person’s gift or getting a new gift. Everyone brought in $5 for pizza.

Brothers and Initiates brought in school supplies or money in order to play Quizzo. The game involved asking questions to the applicants and brothers that they have to figure out the answer. The winning team got a prize at the end.

Initiates taught the history of Christmas to brothers and other Initiates.

Initiates made cookies and sold them during Free Period in Campion.