The Beta Alpha Mu Family, or BAM, is a family of the Zeta Iota Chapter descended from Nick Conway.

The Beta Alpha Bu Family, better known as BAM, began during the Fall of the 2011 semester when Charter Class Brother Nick Conway received his first little, Travis Knapp. Travis received a great internship in North Jersey and was not on campus for the semester. Nick then decided to apply for another little, Grant Mallues. The following semester, Nick fell in love with Mark McShane during the recruitment process and applied one more time to be a big. Nick received Mark as a little and was happy with his family size and togetherness. Travis came back from a year of absence due to his internship in North Jersey and adventures in Australia and applied to become a big. Nick Pedano then joined BAM as Travis' little. BAM did not gain any new members from the Epsilon Class, but the Zeta Class allowed further expansion for the family. Mark received Luigi Nuñez as his little, and Nick Pedano had Ryan Vance as his. Travis aided in mentoring Ryan Vance because Nick was hospitalized and his ribs were removed. The BAM Family has held several Executive Board Positions, Initiate Positions, and Executive Council Positions. Each BAM Family member has held a leadership position in the Zeta Iota Chapter. 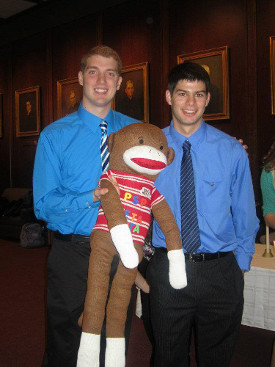 One of the biggest traditions is yelling the word 'BAM' whenever any BAM family member does something great. We also have a sock monkey called 'BAM-BAM'. BAM Family is currently on its 2nd BAM-BAM. BAM also has a paddle made by Travis Knapp that is bestowed to the current patriarch/matriarch of the family. The paddle is a symbol of leadership of the family.

The BAM Family has held the following positions: