Zeta Psi Chapter (Founded 28 April 2013) is located at University of Nevada, Las Vegas in Las Vegas, Nevada. The chapter is a member of the Pacific Coast Region. 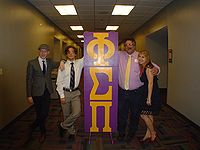 The Zeta Psi chapter of Phi Sigma Pi was first envisioned in early November 2012 by University of Nevada, Las Vegas (UNLV) undergraduate Honors College students Richard V. Foster and Natalie A. Schibrowsky. The precipitating event that led to the founding was the rejection of multiple students who wanted to join traditional Greek organizations because they were "too into their education." Dismayed by the rejections of these students, Richard and Natalie began to research alternatives.

One of the first steps was the UNLV Campus Life office, were in a meeting Richard and Natalie asked what the steps were to form a coeducational honor based fraternity. The result of this meeting was heartbreaking; according to the university staff, there was no such thing as a co- educational honor fraternity. Again dismayed, yet not taking "no" for an answer, a search was conducted, now focusing outside of UNLV. Within four hours of that meeting with the Campus Life office, Phi Sigma Pi was located. Here was exactly what was needed at UNLV, a group that placed educational excellence on an equal footing with both social and service activities, and one that welcomed both men and women.

Over the next few months, Richard and Natalie, now joined by Andrew F. Campling and Ryan M. Cunningham, started working as a team to meet the basic requirements of forming a new fraternity. This was no small task, as there was a lot to do. The four founders had many tasks to complete before Phi Sigma Pi would approve the establishment of a colony at UNLV. These tasks included recruiting a UNLV faculty adviser, completing the process to be recognized by the university as a Student Run Organization (RSO), obtaining a tax account from the IRS, opening a bank account, holding informational meetings to recruit potential members, not to mention designing and building of chapter letters. 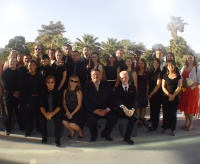 On the 4th of March 2013, Richard, Natalie, Andrew, and Ryan were joined by twenty three additional students to travel a new path, together as a colony. Officially pinned on this date, the new members of the colony began a new set of tasks, learning the history of the national organization, scheduling and holding social, fundraising, service, and scholarly events, taking tests, and filling out interview books.

The resulting founding class of UNLV students could not have better come together as a unit. No one could have hoped for a more coordinated or cohesive group. With the assistance of UNLV faculty members Dr. Julie Staggers and Dr. Heather Lusty, the colony was initiated and became a recognized chapter of Phi Sigma Pi on the 28th of April 2013.

Original Members of the Chartering Class

The Founding or Charter class included 26 brothers, however, one name has been removed from list; the brother in question was later expelled from the Zeta Pi chapter for behavior unbecoming a Brother of Phi Sigma Phi.