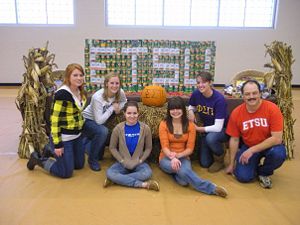 Brothers participating in Can Food Creations, a Homecoming event at ETSU. All cans were donated to local food banks afterwords; Kristina - 2nd from left

In her own words:

"I decided to join Phi Sigma Pi as a way to do something that I felt would allow for me to get to know more people. I really liked the fact that we are involved in community service projects and I felt that it was a good way for me to get involved in something I might enjoy. After going through the initiate process, I realized I enjoyed the fact of how diverse our chapter is as a whole. However, I realized I liked it because it makes us different from many other organizations and that though we may have our disagreements on many things we still can come together as a unit and compromise or agree to disagree."

Kristina can be reached via email at: alexandk@goldmail.etsu.edu