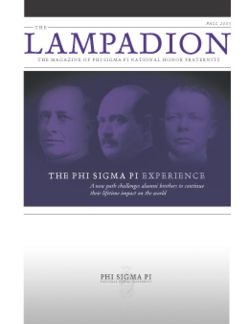 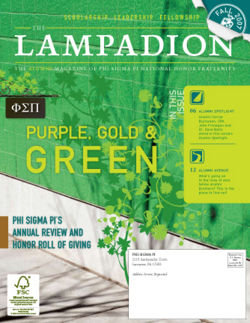 The Lampadion is one of Phi Sigma Pi's two publications, the other being the The Purple & Gold. The Phi Sigma Pi News Letter became The Lampadion in 1931. James K. Stoner served for two decades as the editor of the magazine. The main audience for the magazine is alumni Brothers. While still a separate publication from The Purple & Gold the two started being printed together in 2004. Printing the two together allowed for reduced costs as well as being more environmentally friendly. Also the two magazines now reach both undergraduate and alumni audiences.

It is initially mailed three times a year, but it is changed to twice a year starting in 1937 and then once a year starting in 1940. There are 17 issues of The Lampadion known to exist between 1931 and 1942. The magazine went out of circulation in 1942 with the start of World War II. It is brought back in Fall 2002.

Past issues of The Lampadion, 2003-present