Lindsey Smith (born May 26th, 1994) is a Collegiate Member of Tau Chapter (1848) at East Carolina University. Lindsey Smith was inducted as part of the Gamma Iota Initiate Class.

Lindsey's parent's, John B. Smith (Brother, inducted 1985) and Leslie D. Smith, met while attending East Carolina University. With that being said, she grew up a Pirate, and ECU was the only university to which she applied. Going into college she had planned to major in Health Services Management and minor in Business. During her first year at ECU she was part of the Wellness Living Learning Community (WLLC) and lived in Garrett Hall. The spring semester of her freshman year she decided to make the Business minor into a major. At the end of her first year she was named the Outstanding First Year in the WLLC and made Dean's List. As a sophomore she continued her involvement with the WLLC as a Peer Mentor to the new first years. The fall of 2014 Lindsey got an email from Phi Sigma Pi, and she decided to rush. Her father had expressed great affection towards the fraternity, and she felt compelled to get involved.

As a new Brother, Lindsey has yet to hold any positions within Tau Chapter, but aspires to become a leader within the fraternity. Currently serves on the Alumni Relations Committee. 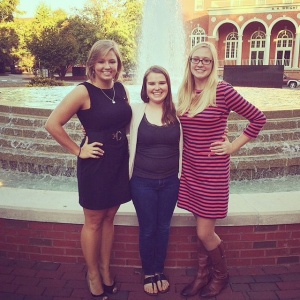 Her twin is Taylor Johnston (ΓΙ)