Ashley had planned to attend art school in Chicago, IL after completing high school and reluctantly submitted an application to ECU by request of her father. Events occurred out of Ashley's control that made ECU her only option. Upon her arrival at ECU's campus, Ashley was simultaneously frightened and excited. After merely a semester studying at ECU, she had fallen in love with the school. She had discovered two majors that worked together to produce the degree she wanted to obtain, a couple clubs and got an invitation to join Phi Sigma Pi at the beginning of her second semester. The night of Smoker is really what captured Ashley's attention. She was able to see that the group truly was a Brotherhood pursuing great ranks in scholarship and service while maintaining wonderful fellowship and having fun! Continuing on with initiation, she was pinned in the Gamma Beta Initiate Class and was inducted into the Brotherhood that April. 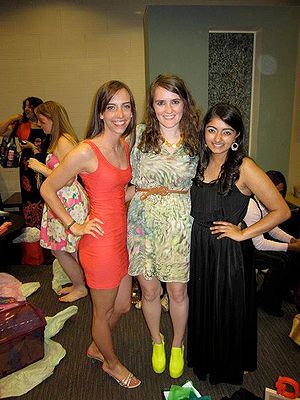 Ashley's father was key in her pursuit of joining Phi Sigma Pi. Not only because he is an inspiration to her, but because he himself pledged Phi Sigma Pi while attending ECU. Ashley has spent most of her life moving from place to place, in total she has lived in 6 states and 2 countries which has only enhanced her love of traveling. Upon graduation from ECU, she plans on moving out west to complete a graduate program at a fashion design school. Her ultimate goal is to become a fashion designer and open her own store/create her own brand.