Erin N. Peterson (17 August 1988 - 16 April 2007) was an Initiate of Alpha Rho Chapter (ΑΡ 696) at Virginia Tech. Erin was among the 32 victims of the Virginia Tech tragedy on the morning of April 16, 2007 in which a shooter opened fire in a dormitory and academic building. She was inducted into the Chapter posthumously. 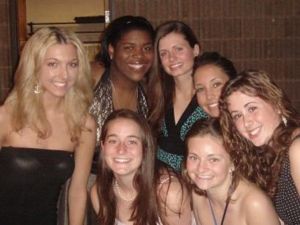 Erin with Alpha Brothers and Initiates

Erin enrolled at Virginia Tech in Fall 2006 after graduating from Westfield High School in Chantilly, Virginia. She rushed Phi Sigma Pi in Spring 2007 and was extended a bid to become a member of the Alpha Eta Initiate Class. Erin completed all initiation requirements, and went beyond merely the minimum requirements, attending many optional activities. Her trademark smile and enthusiasm were infectious. Commented Erin's Initiation Chair, Megan Caligiuri, "Erin's laugh was contagious, her smile warming, her energy irresistible, her attitude positive, and her thirst for knowledge, relationships, and experiences-- insatiable. She played an active role on every pledge class committee, but obligations aside, her attitude was one of the most important facets anyone could contribute to the group. When time was tight and stress was high, Erin's optimism would boost the morale of her fellow classmates. All it took is one laugh to escape Erin's mouth, and somehow everyone else would end up laughing."

Outside of Phi Sigma Pi, basketball was one of Erin's true loves. At Westfield High School, she was Captain of the Girl's Basketball Team, and she continued to call to her former team throughout her freshman year at Virginia Tech to deliver inspirational messages. Her love of the game also led her to participate in the university's intramural basketball program.

Erin was also involved with EMPOWER, an organization dedicated to building self-esteem and confidence in young minority girls. She was elected Co-President of the group in Spring 2007. Her leadership potential and work ethic was further exemplified by her selection for a prestigious internship at Rolls-Royce following her senior year of high school, an internship she planned to continue the summer following her freshman year of college.

On the night of Sunday, April 15, 2007, Alpha Rho held Final Vote on the Alpha Eta Initiate Class. Erin passed the vote and was scheduled for Induction on Thursday of that week.

On the cold, windy morning of April 16, Erin was sitting in her French class in Norris Hall Room 211 when a gunman forced his way into the room, fatally shooting Professor Jocelyne Couture-Nowak as she attempted to block the door. After shooting several students, the gunman left the room and later returned, shooting several more before turning the gun on himself as police stormed the building. Erin, along with Reema Samaha, sister of Alpha Rho Alumnus Omar Samaha, was among the eleven students killed in Room 211. She was one of 32 total victims whose lives were tragically cut short that day by the gunman in the shootings at a campus dormitory and Norris Hall.

Erin's funeral on April 24 was attended by well over 1,000 family and friends, including nearly one hundred Alpha Rho undergraduate and alumni Brothers wearing their brother pins and purple and gold ribbons in a show of unity. Erin was laid to rest in the shirt she rightfully earned but never had a chance to wear during life: her letters. She was posthumously inducted into Alpha Rho Chapter with the rest of her initiate class. 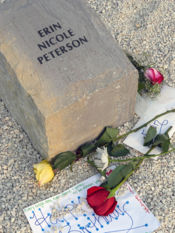 This grant program, which began in Fall 2010, is funded through the Alpha Rho Chapter Endowment Fund. In recognition that each and every new brother is cherished, the grant program funds national dues for each Alpha Rho Brother in his/her first semester as a Brother.

After the April 16th tragedy, Virginia Tech constructed a memorial to the 32 victims. Each victim has a Hokie stone inscribed with his or her name arranged in a semi-circle on the Drillfield, located at the center of the Virginia Tech campus. The memorial serves as a location for Virginia Tech students, alumni, staff and visitors to reflect, remember and grieve.

After the memorial was constructed, Erin's stone was added to the Alpha Rho Chapter History Appreciation List.

The Erin Peterson Fund was created on May 9, 2007 by the Peterson family from the thousands of dollars in support it received in the weeks following April 16th. The fund pays for two scholarships-- the Erin Peterson Leadership Award and the Erin Peterson Commit to Excel Award-- at Westfield High School, Erin's alma mater.

The Loudoun Habitat for Humanity is building five houses for low-income families in honor of Erin. The land the houses are being built on was donated by Virginia Tech alumnus Jon Butt, and Alpha Rho Alumna KC Eady is heavily involved in advertising the project, including fundraising events.

Erin's middle school Merritt Academy dedicated their gymnasium in her memory. A student is awarded with the Erin Nicole Peterson Sportsmanship Award annually.

Erin with her Big Brother Andy

Erin's Big Brother is Andy Schrider, who is a 2007 Alumnus of Alpha Rho.