Megan moved from Worcester, MA to attend Clemson University in the fall of 2003. After a freshman year spent on the rowing team, Megan was looking for a new student organization to get involved in. During her sophomore fall she rushed Beta Kappa as one of three initiates, thus holding multiple offices as a part of Phi class. Despite having to medically withdraw from Clemson for the semester (ya mono!) Megan was inducted into Beta Kappa in the fall of 2004.

After returning in the Spring of 2005, Megan was a fairly active brother. She served on the Financial Committee, helping the chapter raise funds through various events including selling concessions at concerts at Littlejohn Coliseum, basketball and baseball games. She also served as Recording Secretary, and helped to organize the Mid South Region Conference when Beta Kappa hosted in 2005.

Megan participated in multiple road trips with the rest of Beta Kappa to visit other Chapters, including Alpha Beta, Alpha Omicron, and Alpha Rho, as well as attending GET SLAM'D at Gamma Epsilon and football games with Alpha Upsilon.

Unfortunately thanks to an extended course load (a mixture of graduating early and making up for medical withdrawl) Megan was inactive during Spring 2006, her final semester at Clemson University.

After graduating from Clemson University in May 2006, Megan moved to Charlotte, NC where she worked as a fourth grade elementary school teacher for two years. While in Charlotte Megan visited Beta Kappa for multiple alumni events including home football games and the 2007 "Murder Mystery" Founder's Weekend. She also worked with several brothers to make the unofficial Phi Sigma Pi Nation - mainly creating graphics for various chapters and the website.

In August of 2008, Megan moved to Tokyo, Japan where she worked for AOBA-Japan International School as a Learning Resource instructor.

In 2010, Megan moved to Tallahassee, FL to attend graduate school at Florida State University. In December 2011, she received her MS in Sociocultural and International Development Education Studies. Currently she is working on her PhD in international education policy and development. She works as the graduate assistant for the Educational Leadership and Policy department in the College of Education.

Megan's Big Brother is Matt Miller, a fellow Alum. They are descendants of FreshBoy and thus members of the infamous 'Fresh Family'. 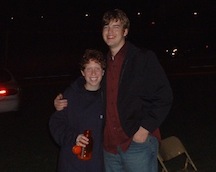