The Gamma Epsilon Chapter (Founded 26 February 1996) is located at the University of Florida in Gainesville, Florida. The Chapter was founded by Chapter alumnus Pete Siedle and is a member of the Southeast Region. 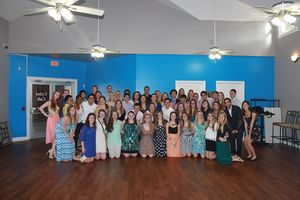 The Gamma Epsilon Chapter of Phi Sigma Pi was founded at the University of Florida on February 26, 1996. There were 200 members at founding, and there are currently 68 members. Gamma Epsilon has improved tremendously since its beginning, and won the award for the Most Improved New Chapter in Spring of 1999. The chapter has also won several awards from the UF community, most recently earning the second most spirit points among all Dance Marathon participants, and raising the second most money in the student organizations category.

The standing committees are headed by 1 or 2 chairs and are as follows: 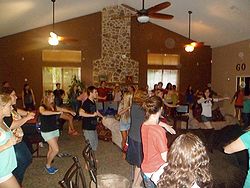 GET SLAM'D stands for Gamma Epsilon Teaches Scholarship, Leadership, And Membership Development. This is Gamma Epsilon's annual ICR event. It is held every March and Brothers from all around the country are invited to come to Gainesville for the weekend. Brothers attend the traditional scholarship event, Learn From Your Bros, where Brothers are invited to teach any skills or hobbies they may have. Presentations range from recipe demonstrations, to Origami; from Zumba, to the art of using Facebook. It allows for Brothers to learn about each other's interests and to break the ice. The main GET SLAM'D event is usually an outdoor activity. In the past it has included trips to Ginny Springs and UF's own Lake Wauberg.

This past year, ICR teamed up with the Dance Marathon committee to inform GET SLAM'D attendees about Gamma Epsilon's annual participation in Dance Marathon at UF. All of the profits from GET SLAM'D were donated to DM. The DM chairs gave a presentation at the main Saturday event, where they explained why this event is so important to Gamma Epsilon, and what it represents to the Chapter. All Brothers were encouraged to work together and create posters to motivate Gamma Epsilon's dancers who would be participating in the 26.2 hr event the following weekend. The posters not only supported the dancers, but created a sense of fellowship across multiple Chapters. An example poster read, "Gamma Eta loves the Gamma Epsilon dancers". This is a new aspect of the event that the Chapter would like to continue in the coming years. 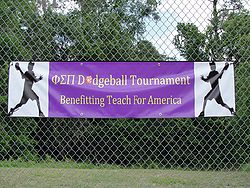 In the Spring of 2012, the Gamma Epsilon Service committee found a new way to raise money and awareness for the National Philanthropy "Teach For America". This came in the form of a Dodgeball Tournament. The purpose of this event was to not only raise money for TFA, but to raise awareness for the philanthropy. The goal was to showcase that TFA was not only the Fraternity's National Philanthropy, but an amazing organization that has the potential to change the future. TFA provides children growing in poverty the opportunity for a quality education. In the eyes of the Spring Service Committee Chair, Kristen Albert, "TFA opens up a future that they may not have had before, and truly changes their lives. Every penny counts, but monetary donations are not always the most important thing. Through raising awareness, we hope to inspire some people to become teachers and enter the program."

In order to PR for this event, the committee spread flyers throughout the Student Union, and created an event page on Facebook, encouraging all Brothers to invite friends from outside the Fraternity. The committee also reached out to other campus organizations in an attempt to spread awareness to the University's 50,000 students. In the end, 6 teams, comprised of 48 participants, faced-off in the tournament. In addition to those playing, the event had nearly 40 volunteers and supporters. Overall, $330.06 were raised and donated directly TFA. The tournament was seen as a huge success and the Service Chairs would love nothing more than to see it continue year after year. 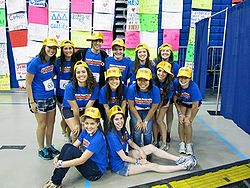 Dance Marathon at the University of Florida is an annual 26.2-hour event benefiting the patients of Shands Hospital for Children in Gainesville, FL. Each year, more than 800 students stay awake and on their feet to raise money and awareness for Children's Miracle Network Hospitals. In the 19 years of Dance Marathon at UF's existence, more than $6.4 million has been donated, making it the most successful student-run philanthropy in the Southeastern United States.

Gamma Epsilon participates in the University of Florida's Dance Marathon (DM) each year. Through years of participation, the Gamma Epsilon Chapter has raised nearly $65,000 in support of this event.

This past year, 12 Brothers stood on their feet for 26.2-hours during the fundraiser. The Chapter raised over $15,000 in 2012, and over $12,000 in 2013. This record total for the Chapter earned Second Place in it's fundraising category. The Chapter had a number of other Brothers who were members of the DM staff, as well as one Brother who was a DM Entertainment Captain.