Zeta Alpha Chapter (founded 3 April 2010) is located at University of California, San Diego in San Diego, CA. Zeta Alpha is the most senior Chapter in the South Pacific Coast Region and a founding Chapter of Team Zeta and the west coast region. 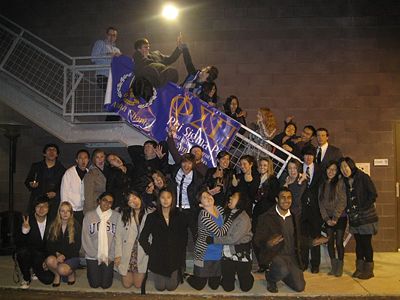 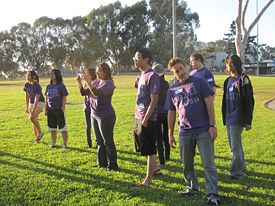 Efforts to found a Phi Sigma Pi chapter started when Alumna Kathryn Lieber, a graduate student at University of California, San Diego, contacted the National Office for expansion assistance during Fall Quarter of 2009 at the university. At the end of the quarter, only seven undergraduate students were interested in the fraternity. Seeing low turnout, the Director of Expansion Ryan DeGuzman and Kathryn Lieber decided to extend recruitment drive to the beginning of Winter Quarter. However, the stability of the group of students decreased when four of the seven withdrew from expansion effort over Winter Break. Moreover, the four students requested the UCSD Center of Student Involvement to revoke Phi Sigma Pi as an official student organization at UCSD. However, the other three students held their spirits high, and committed themselves to starting a colony. The three Founding Members (Hana Lee, Natasha Best, and Martin Kwok), the Alumni Advisor Kathryn Lieber, the Staff Advisor Colleen Garcia, and the Director of Expansion coordinated and prepared for the recruitment drive for the beginning of Winter Quarter.

After days of informational sessions during Winter Quarter, at the first organization meeting, 26 undergraduate students pledged themselves as the Founding Class, the Charter Class, the Colony Class, and the Alpha Class of Phi Sigma Pi at UCSD. Executive Board Officers and Committee Chairs were elected, and the Colony Class was finally established. However, through the course of the quarter, many Initiates withdrew from the Initiation Program, and only 18 Initiates stayed by the end of Winter Quarter. The Zeta Alpha colony bonded cohesively throughout the quarter as it fulfilled its requirements to request a charter. Nevertheless, under the leadership of the Colony Class President Natasha Best, the charter petition was finally approved at the beginning of Spring Quarter on April 3, 2010. Thus, Zeta Alpha Chapter was inducted into Phi Sigma Pi with 18 Charter Members. 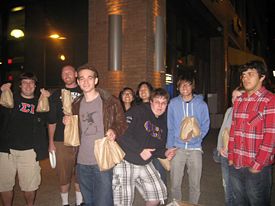 Immediately after Induction and the Chartering of Zeta Alpha Chapter, the Rush and Initiate Advisor Daniel Coffee and the Rush and Initiation Committee coordinated a successful Rush Week. By the end of the first quarter of Zeta Alpha Chapter, the size of the Brotherhood nearly doubled with the induction of Beta Class. During the first quarter, the Chapter expanded as Officers, Chairs, and Brothers solidified the Chapter Bylaws, programming, families, and traditions. Moreover, Zeta Alpha provided support and assistance to the Zeta Epsilon colony at University of California, Santa Barbara and oversaw its Induction. In addition, to address the safety concerns for fraternal events, the Chapter adopted Chapter Risk Management Policies to ensure proper preparation and care of risks and emergencies.

For the following quarter, Zeta Alpha Chapter expanded its size and inducted Gamma Class. Furthermore, Zeta Alpha Chapter created a new standing committee, the Brotherhood Development Committee, to address larger Chapter events such as retreats, banquets, and formal dances to foster a greater sense of Brotherhood and fraternal fellowship as a whole. The Chapter also split the Secretary and the Rush & Initiate Advisor into two positions each to address the growing workload on the Officers. To improve the efficiency and effectiveness of the Executive Board and the committees, the Chapter adopted a set of Operating Policies to bolster the Chapter Bylaws and Chapter's Risk Management Policies. Meanwhile, Zeta Alpha also provided support and assistance to the Zeta Eta colony at University of California, Riverside and oversaw too its Induction. Excited to participate in the Southwest Region, the Zeta Alpha Chapter placed a bid to host the Regional Conference despite not having yet attended any Regional Conference. Zeta Alpha Chapter enjoyed its first annual retreat in Cleveland National Forest. 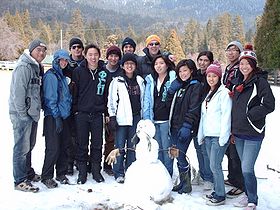 Zeta Alpha Chapter ended its first year at the end of Winter Quarter 2011 with a newly elected Executive Board and Committee Officers excited to carry the Chapter throughout its second year. During Spring Quarter of 2011, the Chapter celebrated its founding with a Chapter banquet honoring the one-year achievement of the Chapter, and as well as recognizing and awarding few individuals who exemplified extraordinary commitment to the fratertniy. After much planning and preparation, Zeta Alpha hosted and attended its first Regional Conference from April 8th to April 10th. Zeta Alpha ended the first complete academic year with the Induction of Delta Class and of Zeta Lambda colony at University of California, Los Angeles. 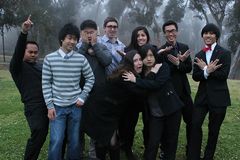 After the 2011 National Convention, Zeta Alpha was moved from the Southwest Region to the Pacific Coast Region after the region realignment. Because of many conflicting internal issues, in Fall Quarter 2011 the Chapter underwent a major change in its membership, known as the "Great Purge", which resulted in the resignation of half of the Chapter. Because of this event, the Chapter experienced the ending of multiple fraternal family lines, leaving only 10 families left, from the original 18. Despite the reduction in manpower and resources, Zeta Alpha Chapter inducted Epsilon Class and helped found the colony Zeta Mu at University of California, Irvine by the end of the Fall 2011. Zeta Alpha finished its second year with a successful second annual retreat at Camp Nelson, the selection of Knowledge Is Power Program in Downtown San Diego as our Chapter's local philanthropy, and the election of its third Chapter Executive Board. During the year's annual Chapter Charter Day celebration, the Chapter presented the Chapter Service Key to Alpha Class Brother Elaine Yu and Founder Class Brother Martin Kwok, and inducted Brother Kathryn Lieber as an Honorary Member for her service to Zeta Alpha Chapter. At the 2012 National Convention, the Chapter won the Pacific Coast Region’s first Top in Region Award. 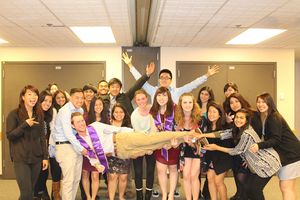 In the following year of 2012-2013, Zeta Alpha continued to grow and evolve, such as establishing an intramural team, creating the first Chapter composite, expanding the Historian's archives, and starting the annual formal banquet. In Winter Quarter 2013, the Chapter held its third retreat at Camp Pendleton and inducted Theta Class into the Brotherhood. The annual award ceremony had been presented at the annual Chapter Charter Day celebration, but has been moved to the newly coordinated annual formal banquet, during which the Chapter presented its third Chapter Service Key to Alpha Class Brother Daniel Coffee. During this year, the Chapter oversaw a reduction in events planned per quarter to increase the quality and attendance of events, a growth of Brotherhood Development weekly activities and quarter games, and innovative and profitable fundraising events. By the end of the year, the Chapter had 5 remaining families left from the original 18 families, and completed its third year with the election of its fourth Executive Board. 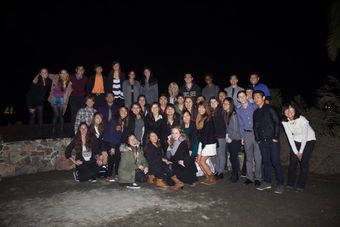 Despite having cancelled Winter 2014 recruitment drive, the Chapter held in high spirit the second annual formal banquet, the fourth annual retreat in Idyllwild, and the induction of Iota Class. Despite a successful Spring 2015 Initiation Program, the remaining 5 families dwindle to 4 as two families conjoined their lines. However, under the leadership of the fourth Executive Board, the Chapter oversaw improvement in ICR events quality and frequency, a gradual shift towards professionalism, the streamlining and consolidation of Chapter operations and event programming, and significant increase in fraternal revenues and savings. With the ending of the Chapter's fourth year, the Pacific Coast Region split into two, with Zeta Alpha's reassignment to South Pacific Coast Region and promotion to the most senior Active Chapter status on the coast with the inactivity of Delta Omega Chapter.

Following the transition into the fifth year with the election of the fifth Executive Board, the Chapter expanded the scope of the Judicial Committee, revamped the Chapter's public relations and social media management, shortened meeting times, expanded Alumni outreach, and updated and reformatted the Chapter Bylaws and Operating Policy. Despite facing numerous communication problems and internal operations disagreement leading to the "Great Flight" of resignations, the Chapter successfully inducted Kappa and Iota Class, also in spite of cancelling Winter 2015 Initiation Program. Under the leadership of President Charlie Chen, who subsequently de jure held simultaneously record-breaking 10 Chapter elected positions, the Chapter weathered through 6 vacancies on the Executive Board and 1 Committee Chair vacancy to emerge stronger with the election of the Chapter's sixth Executive Board, fresh from the Chapter's fifth retreat in Wrightwood and highly-charged Fraternity discussions, consequently pushing the Chapter beyond the national status of a "New Chapter" (younger than 5 years). For his extraordinary service and commitment to the fraternity during his whole collegiate career, the Chapter bestowed its prestigious Chapter Service Key to the 4th recipient Charlie Chen. For outstanding progress in communication and organisational management of the Chapter, the 2015 Steven A. DiGuiseppe Excellence in Administration Award was bestowed to Zeta Alpha Chapter at 2015 National Convention at Washington, DC.

Chapter Internal Awards are given annually during Spring Quarter at a Chapter banquet to recognize the efforts and accomplishments of Zeta Alpha Brothers. The awards include both superlatives as the more relaxed recognition for outstanding service to the Fraternity or comedic celebration of the individual Brothers, and official annual awards including the Tripod Awards, the Unsung Brother Award, and the Brother of the Year Award. The Chapter Service Key and Honorary Membership are not required to be awarded annually.

The Chapter Service Key, Zeta Alpha's most prestigious internal award, has been bestowed only six times to Brothers Elaine Yu (2012), Martin Kwok (2012), Daniel Coffee (2013), Charlie Chen (2015), Annalisa Salazar (2016), and Bennett Sanderson (2019) in recognition of their timeless and priceless dedication to the Chapter from their time in college through their active alumni life. Honorary Membership was granted to Brother Kathryn Lieber (2012) for her countless assistance to the Chapter during its crucial first two years as the Chapter's first and most notable Alumni Advisor.

The Chapter currently has a ten-member Executive Board. Officers are elected at the end of each Winter Quarter to serve till the end of the following Winter Quarter. The Registrar is recognized as the recording secretary, while the Epistolarian is recognized as the corresponding secretary. Historian has been split into two positions to reduce overall workload. Any vacancy is filled temporarily by the President until a replacement is elected by the Chapter.

The Chapter currently has nine Standing Committees. Each Standing Committee represents an unique aspect of Zeta Alpha Chapter and Phi Sigma Pi. Each Chair is responsible for leading his or her committee to accomplish its goals and carry out its responsibilities. The Judicial Committee convenes at the call of the Chapter or the Executive Board, in addition to its regular duty of disciplinary action review and Big and Little pairing. Per the Chapter Bylaws, the Parliamentarian serves as the Judicial Committee Chair. The Recruitment and Initiation Committee has been removed and the Alumni and Inter-Chapter Relations Committee has been split into two individual committees: Alumni Relations and Inter-Chapter Relations. Any vacancy is filled temporarily by the Vice President until a replacement is elected by the Chapter.

The Chapter must have at least one Staff or Faculty Advisor, and at least one Alumni Advisor guiding the Chapter. The Advisors serve to counsel the Executive Board, the Chapter, and any individual Brothers in the matter of fraternal or professional issues. In addition, the Advisors assist in the outreach to Chapter and regional alumni, and aid the Chapter leadership through crisis management, such as emergency meetings or recruitment challenges.