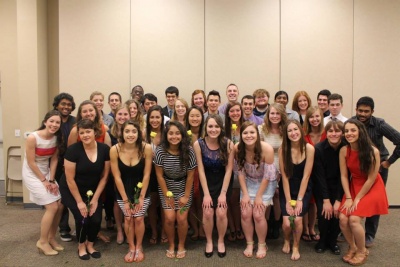 Epsilon Omega Chapter (Founded 30 April 2009) is located at Arizona State University in Tempe, Arizona. The Chapter is a member of the West Region.

Epsilon Omega was chartered in April of 2009. Despite several Brothers trying to keep the chapter alive, the chapter suffered from poor recruiting. The chapter fell behind in National requirements and was placed on probationary status. Fortunately for the chapter, a core group of four people, were inducted into the Brotherhood and were able to use their determination to keep the chapter moving forward. With the help of Region Consultants and other National Staff members, the chapter was able to pay any outstanding dues, develop solid recruitment practices, and move the chapter in a positive direction.

After the Chapter's founding it struggled to sustain membership. In the spring of 2011 the Chapter was restructured bringing in a new class of 28 Brothers on May 3, 2011. After another semester of struggles, a core group of dedicated Brothers emerged to bring the chapter to a state of solidarity. The chapter continues to gradually grow and add to their ranks more dedicated Brothers to continue the dedication.

Epsilon Omega continues to grow and thrive each semester. Under the tutelage of current chapter president Megan Phillips, the executive board and committee chairpersons are able to work in a collegial and integrated way. Numerous scholarship, service, fellowship, and fundraising events are held each semester. Recruitment and rush are smoother than ever and attracting many of the best students ASU has to offer.

Epsilon Omega celebrates the Chapter's founding by joining together for a formal dinner celebration.