Beta Lambda Chapter (Founded 23 February 1994) is located at American University in Washington, DC. The Chapter was founded by Rho Chapter alumnus Derek Simmons. It went inactive in 1995, and was reactivated on April 25, 2011. 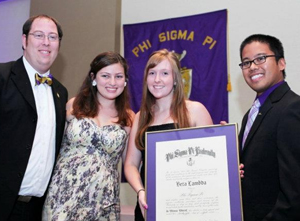 Beta Lambda receiving their charter at the 2011 National Convention.

Sixty Brothers were inducted as part of the colony charter class in 2011.

The Families of Beta Lambda

The unofficial mascot of Beta Lambda is a Lamb.

see also: List of Beta Lambda Chapter Executive Boards
The Executive Board is made up of nine elected members. The Recruitment Advisor and the Brother-at-Large are non-voting members.

The Eta Class is the most recent initiate class to be inducted.

Beta Lambda celebrates the anniversary of its reactivation. The celebration is usually low-key and traditionally involves cake.