Alpha Theta Chapter (Founded 11 March 1990; Reactivated 17 April 2006) is located at Rutgers University in New Brunswick, New Jersey. The Chapter was founded by David Eshelman, Sigma Chapter Alumnus. The Chapter went inactive in 1999 but was reactivated in Spring 2006. The Chapter is a member of the East Region. 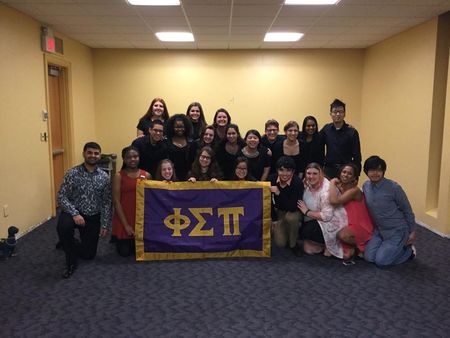 Recruitment always posed a challenge for the chapter. As membership numbers dropped the challenges increased. In 1999 the chapter did not register as a student organization with the university making it too difficult to operate. The chapter went inactive later that year.

Alpha Theta was recolonized in Spring of 2006 with the help of David Rosengrant, (Chapter Advisor). Paul Turchin, (Alumni Advisor) along with the help of Alpha Iota, later helped strengthened the foundation of the Alpha Theta Chapter. They welcomed the Tau class at the end of the Fall 2006 semester, and Upsilon in 2007. The colony class' hard work paid off immediately for the chapter as they were recognized as one of the top chapters at the school's annual "Greek Awards". Today they are working to build not only the Chapter, but also to establish themselves in the Rutgers community; as well as provide the same dedication to service throughout not only the New Brunswick area, but globally as well.

The chapter's official mascot is the Phoenix. The Phoenix is a mythical creature which symbolizes the recolonization of the chapter because of its connotations concerning "Rising From the Ashes". Today the Alpha Theta Chapter continues its' rise as it gains in not only membership, but the quality and quantity of their events, as well as the general spirit of their Brotherhood.

In addition to the official chapter mascot, Alpha Theta has an initiation mascot by the name Larry the Initiate Dinosaur. When started by Alpha Theta Brother Cara Feldscher in Spring 2013, Larry was merely a drawing on the chalkboard during Initiate meetings. Since then Larry has found physicality in a stuffed dinosaur gifted to the chapter by the Alpha Lambda class. During the course of initiation, he spends each week with a different initiate.

Today, the chapter operates under the guidance of the Executive Board as well as the nine committees (the Executive Council guided by the Vice President) that plan events that help foster the growth and development of the chapter either through gaining members or embracing tripod ideals. The chapter is entering its tenth full year since its reactivation in Spring 2006. Since the colony's induction in Spring 2006, there have been 19 classes (Tau through Alpha Mu). The membership of the Brotherhood after the graduation of some Brothers in May 2015 is currently around 20 Brothers including those who are inactive. The chapter continues to make strides to growth amongst the Phi Sigma Pi nation, the Alpha Theta ranks, and the Rutgers community through events, recognition, and improvements.

Alpha Theta celebrates the Chapter's founding each April with a Founders' Day Celebration.

Alpha Theta began AIDS Awareness week to do simply that: Create more awareness for AIDS and HIV among the younger generation, erase the stigma, and raise money for Alpha Theta's local philanthropy, the Hyancinth AIDS Foundation. Since the introductory week, AIDS Awareness Week has become a campus-wide event lasting typically four days, once a year. In the past, this week has traditionally been planned in the Spring semester. Each of the four days includes a variety of activities, which have included informational panels and discussions, free instant HIV testing, blood drives, bake sales, and more. Brothers and Initiates alike participate to make this event a success.

In 2015, Alpha Theta voted to look into a new local philanthropy, ultimately settling on the American Foundation for Suicide Prevention Week. As a result, AIDS Awareness Week became Suicide Prevention Week: a week in which the Brothers strive, much like it did in AIDS Awareness Week, to spread more awareness about mental illness and raise money for their local philanthropy.

In Fall 2007, the Alpha Theta Chapter launched its "Reason for the Seasons - Rush Phi Sigma Pi" Recruitment Campaign. The Brothers discussed in depth what they were looking for in prospective candidates and the amount of Rushees they wanted to initiate (7-10). The Recruitment Committee planned a 2-week Recruitment with 4 information sessions at 4 out of the 5 Rutgers campuses, as well as 4 social events that reflected each of the 4 seasons; an Oktoberfest meet and greet with rootbeer etc, a Mardi Gras for the winter with a canned food drive for Katrina as well as mask making and Mardi Gras beads, a Spring Fling where prospectives could come throw frisbees etc with the Brothers, and an invite-only traditional Summer BBQ.

In Spring 2008, the theme was Just Rush It (like Nike's Just Do It). Like the Fall 2007 Rush, there were four information sessions on four of the five campuses. For the social events, there was Just Bet It, an event with games, Just Search It, an event like a scavenger hunt, and Just Play It, a day of just throwing around a football and having fun.