Gamma Sigma Chapter (Founded 3 April 1997) is located at Missouri State University in Springfield, Missouri. The Chapter was founded by Adam Crumbliss, among other Brothers, and is a member of the Great Plains Region.

The date was April 3, 1997. Seventy-eight students that happened to have a 3.0 GPA were inducted into an "Honor Fraternity." The challenge in that first year was taking a group of students, most of whom joined to just pay some dues, get a certificate, and then never have to do anything, to actually embrace the ideals of Phi Sigma Pi.

The task before the Founders was to get a bunch of "smart kids" to want to spend time- a lot of time- with one another. Not only in meetings and at events, but also at dinner, on campus, at parties (lots of them), and even in each others' homes as a "surrogate family"; as a Brotherhood. The Chapter began with a fund-raiser here and a service project there. They quickly became a circle of friends. Soon Gamma Sigma Brothers found themselves embroiled in one another’s lives. They found themselves partying together, serving together, and learning together.

As Gamma Sigma concluded its first year, it still actively had 50 of 78 Founders, all 5 members of its Beta class, and all 17 members of its Gamma class. The Chapter hosted a strong national event celebrating its Founder’s Day with Brothers attending from as far away as Pennsylvania, Maryland and North Carolina and, as close as Beta Chapter in Kirksville, MO and Gamma Rho Chapter from Western Michigan. The young Chapter had a close-knit bond and desire to make its mark on the national Brotherhood. Not bad for people that initially just wanted to pay their dues and go on about life.

Currently diving through the history books to uncover the "Dead Sea Scrolls" of Gamma Sigma.

The current chapter contains over 40 active Brothers and nearly 175 alumni. Gamma Sigma has most recently received honors at the 2007 National Convention with awards for Most Spirited Chapter and Outstanding Chapter in the Central Region. The Chapter is always looking to improve upon itself while constantly enjoying the Brotherhood. They consistently preach the message about getting involved in the university community, with many of the Brothers being involved in Student Government, Student Orientation and Registration, and Intramural Sports, as well as other professional and social organizations.

Gamma Sigma's Executive Board is composed of 9 elected members. These members are voted during the fall and serve a calendar year.

Gamma Sigma celebrates the Chapter's founding near the beginning of April, when Gamma Sigma was founded. The weekend consists of Induction on Friday night, a formal dance on Saturday night, followed by a social gathering afterward. Brothers from across the country are invited to come join the Chapter in celebrating its Founder's Day.

Sleepout for the Homeless

This event is held once each year, typically in the spring semester. Brothers camp out an entire evening, staying up all night to collect donations. The Chapter gives 100% of the donations to the local Springfield Habitat for Humanity where the money goes to help those without a home in our community. 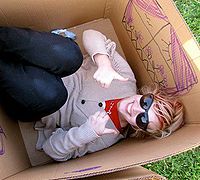