Epsilon Kappa Chapter (Founded 27 April 2007) is located at Wentworth Institute of Technology in Boston, Massachusetts. The Chapter had 33 founding Brothers and is a member of the Northeast Region, and hosted the 2009 Northeast Regional Conference, NERC. 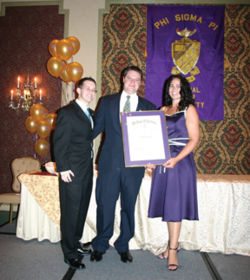 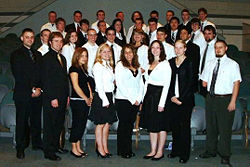 On the 27th of April, 2007 the Epsilon Kappa chapter first established itself. This was a major event in Wentworth's history because it is the first and only National Honor Fraternity allowed on Wentworth's campus. Due to the founding being between semesters, Epsilon Kappa has yet to establish a unique tradition to celebrate its Founder's Day.

With purpose and determination, Epsilon Kappa began making a name for itself on campus. The chapter, over the course of only one year, managed to nearly double itself in size. Motivated by the strong leadership of first President Sean Garrity and Vice President Adam Palmer, Epsilon Kappa continued to collect the top students at Wentworth Institute of Technology.

At EK there are two different sweatshirt traditions. One is done after The Ritual, where a Big purchases a sweatshirt with their family colors for their newly inducted Little. The second sweatshirt tradition happens when a Brother receives a nickname. A standard sweatshirt is ordered once or twice a year for all newly nicknamed brothers that has their nickname embroidered on the sleeve.

After the Ritual when a Big gives their Little a sweatshirt with their family colors, the Little is then responsible for giving their Big a shield that they designed during their initiation. The Shields replace the classic tradition of paddles as paddles represent one of the oldest hazing traditions. Brothers Scott Rogers and Jonathan Swenson started this tradition in Fall of 2014.

In Spring of 2013 the chapter voted to make Andrew's Helpful Hands the local Philanthropy.

In late March or early April, the chapter reserves a room at Maggianno's Little Italy where Alumni mingle with the active Brothers and we learn about what they have been doing since graduation. This is also a time where we honor our graduating seniors who will be alumni shortly. Lastly, if weather is permitting an Alumni vs Brother Ultimate Frisbee game takes place on the Wentworth Quad before we go out to eat.

At the end of the year, the Brother at Large (previously the Scholarship Committee) plans a formal ceremony where we honor Brothers for great achievements, superlatives, and funny awards.

Started in the Spring of 2013 by Jonathan Swenson while he was the Chairman of Service. It has since been made a once a year event in the fall semester, and occasionally Epsilon Kappa brings the registry to NERC. Currently (Spring 2015) Epsilon Kappa has gotten 155 students to register for the National Bone Marrow Registry and have had 4 people get called to donate. Two of these were Brothers Steven Fortier and Brandon Conforti! 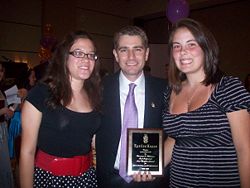