Beta Epsilon Chapter (Founded 7 February 1993) is located at Syracuse University in Syracuse, New York. The Chapter was founded by Aaron Propes (Transfer from Alpha Phi Chapter) and is a member of the Northeast Region. 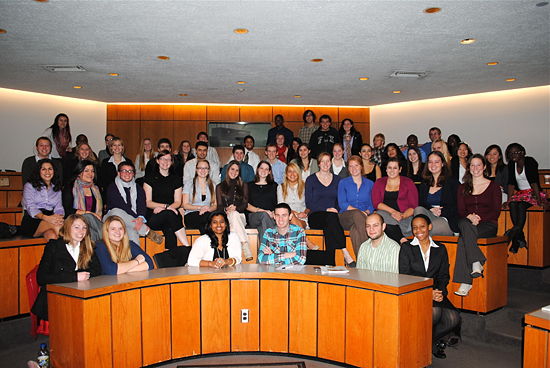 The Beta Epsilon Chapter of Phi Sigma Pi was founded on February 7, 1993 under the leadership of Aaron Propes. After transferring to Syracuse University in 1992 from Eastern Michigan University where he was an active member of the Alpha Phi chapter, Aaron was took on the difficult role of expanding Phi Sigma Pi to the SU campus. His efforts were met with many obstacles including lack of support from the Student Leadership Organization office. However, with the help of the National office and friends, he persevered and the first informational session and official recruitment began.

There was widespread interest in Phi Sigma Pi on campus for it was a unique organization that provided opportunities that may not have been available prior. This interest combined with the fact that there was no official initiation period for the “founding class” resulted in an overwhelming 100 plus members. The new officers quickly burned out and over time many of the first members were expelled due to inactivity.

The following year proved to run more smoothly and effectively. Members began attending National Convention, developing a true understanding and sense of pride to be a brother in Phi Sigma Pi. In March of 1994, Beta Nu Chapter at Cornell University in Ithaca, NY was inducted – the second chapter in New York State, followed only by Delta Alpha Chapter of Rochester Institute of Technology in October of 1998.

Under the leadership of Vice President Heather Pollack in 1995, the chapter made great strides as an active organization. She helped found the PR/Alumni, Fund Raising, Initiation, Social/Education, and Service committees. In addition, Secretary Kristina Beisser and President Jill Tsukuda helped motivate the brotherhood while developing their positions. The third executive board developed the chapter’s attendance policy as well as awarded the chapter’s first Chapter Service Key to Heather Pollack. The Chapter Service Key is the highest honor that a chapter can give to any member for exemplary effort and service to the chapter.

The chapter’s stability took an even stronger root under the leadership of the fourth executive board led by President Khrystyne Robillard and Vice President Kristina Beisser, both recipients of Chapter Service Keys. Since their graduation in 1997, they began “The 2K Scholarship” which is awarded annually to an active BE brother to help alleviate costs of attending National Convention or the semester dues.

The fifth executive board (1997) brought order to our chapter meetings through the introduction of Roberts Rules of Parliamentary Procedure. Despite shifts in the Executive Board, which resulted in two vacant positions, the chapter was blessed with an incredibly strong initiate class in the spring of 1997. The twenty brothers of the Theta class would revolutionize the Beta Epsilon chapter and make great strides in the years to come. Brian Totino, who also served as the President for much of that year, as well as the subsequent year would later go on and receive the Chapter Service Key.

The sixth Executive Board (1998) was the first to remain intact for the full term. It was a time of great expansion within the chapter. Several new committees were formed including Programming/Educational and Inter-chapter Relations. The PR/Alumni committee was split into two distinct committees. The chapter by-laws were also greatly amended and a record number twenty brothers attended National Convention at which Beta Epsilon was recognized for outstanding administrative organization through the Steven A. DiGuiseppe Administrative Award. Chris Frey, who had served as Vice President, became another recipient of the Chapter Service Key.

The seventh executive board (1999), led by President Sarah Bonds, contributed much to the by-laws and organization of the chapter. Grade point average verification, educating the brotherhood of the by-laws, the Alcohol Policy, the Executive Council, the Awards and Scholarship Committee, a precise budget, and increased inter-chapter relations were all goals that were seen to fruition by the team. Also, the chapter received its second Steven A. DiGuiseppe Award as well as its first award for its outstanding newsletter, The Slice. Clearly, this group of seven women on the Executive Board had an incredible influence on the chapter.

During the eighth executive board (2000) the Historical Committee became part of the by-laws. The addition of Historical Committee allowed for the chapter to receive its first professional composite. The creation of a “Sunshine Person” position, increased inter-chapter, public, and alumni relations, critical analysis and amendments of the by-laws, and increased focus on the rush/initiation periods have all been on the agenda.

The ninth executive board (2001) worked to keep open lines of communication between the brothers through evaluations and e-council participation. The all-women e-board also made attempts to increase brother participation through committees and involvement in events. The Sunshine Person was initially added to the Awards and Scholarship Committee and then made into its own official committee. Beta Epsilon hosted an inter-chapter event, Spring Fling Weekend in the spring semester. The GPA issue was addressed and a risk management plan was written. Beta Epsilon was named one of the 13 outstanding chapters for the 2000-2001 year at National Convention. Sadly, during 2001 Beta Epsilon lost one of its most beloved brothers, MariAnne McDonald. The MariAnne E. McDonald Scholarship was established in her memory. 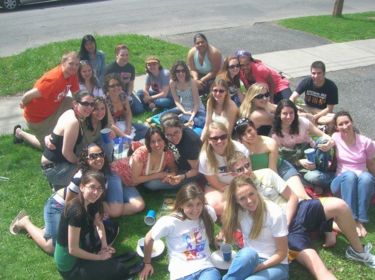 The eleventh (2003) executive board was instrumental in revamping the by-laws, including the addition of the Brother-at-Large executive board position, and providing a basis for bid night procedure. Under its jurisdiction, Beta Epsilon celebrated its tenth birthday, which had almost 100 inter-chapter and alumni brothers, including several from National Council.

The twelfth (2004) executive board tried to carry on the light of the torch that was handed down to them. Early in its term, the eighth Chapter Service Key was awarded to Sara Rosehill (Spring 2004). The executive board worked with the then Awards and Scholarships committee (now known as the Scholarship Committee) to create a remembrance scholar-type ceremony and position for the MariAnne E. McDonald Scholarship. Among other high points, the Alumni committee revived the Alumni of the Year award, awarded to Louise Hendrickson.

Under the thirteenth (2005) executive board led by Tim Horak, the chapter was awarded the Best Chapter in the Northeast region at the 2005 National Convention. This Executive Board's main goal was to put a fresh spin on the chapter and its traditions while keeping them both in tact. This was first evident in the election of two co-Initiate Advisers. The E-Board also put forth the motion to allow seniors to be elected into voting positions of the executive board for their final semester as an undergraduate. Both were very risky decisions that had never been done before but proved to be great successes for the chapter and would influence elections for many years to come. The Chapter dealt with an enormous graduating class, which, in leaving, cut the number of brothers in the chapter down by almost a half. The chapter took on a new identity as the e-board strived to keep the ideals of scholarship, leadership, and fellowship alive in the smaller, younger chapter.

The fourteenth (2006) executive board worked to address problems within the Chapter. This board created a Chapter Meeting Etiquette document to help meetings run effectively, which they later edited and expanded to become the Beta Epsilon Chapter Operating Policy. Additionally the board worked hard to address the Chapter’s dwindling membership by reconfiguring the committee system to maintain stability within the Chapter with fewer members while actively pushing for a strong membership drive for the following spring semester. Finally, the board also passed a change to the Executive Board election system altering terms to align them with the academic year and allowing for a one semester interim board to fill the gap, solving a severe eligibility problem.

The fifteenth (Spring 2007) executive board served as the transition board between a calendar year term schedule and an academic year term schedule. Led by Michelle Sager, Beta Epsilon would induct an astounding 40 brothers to try and curb the huge deficit that would have been left by the large graduating class.

The sixteenth (2007-2008) executive board led a Chapter primarily comprised of new Brothers, meaning that the first goal of the executive board was to develop and maintain the strong sense of brotherhood Beta Epsilon had been accustomed to. Led by President Lisa Thalhamer, the executive board was focused on updating chapter policies and by-laws while also trying to find an efficient way to run a larger chapter and encouraging all brothers to be involved. In their effort to pursue a stronger sense of brotherhood, Beta Epsilon offered to host the annual Northeast Region Conference. The hope was to expose the newest brothers to the benefits of communicating and interacting with other chapters. With the success of the recruitment efforts in the Spring of 2007, the executive board felt that a specific position in charge of recruitment was necessary to ensuring strong initiate classes in the future, and the Chapter voted to add a year-long Recruitment Advisor to the e-board. The Alumni committee revived the Alumnus of the Year award, awarded to Micah Steinberg at the Chapter's 15th Founder's Day celebration. The Chapter was also recognized as Best Chapter in the Northeast Region at the 2007 National Convention in New Orleans, LA.

The current executive board strives to carry on the light of the torch passed down to them and actively pursue a strong set of goals.

From its humble and troubled beginnings, the Beta Epsilon chapter has come a long way. Each and every brother has had a part in the chapter’s recent success and is eagerly anticipating the participation of our future brothers!

Beta Epsilon reserves the Omega Class for brothers who have passed away.

MariAnne E. McDonald came to Syracuse University in Fall 1998 from her hometown of Berkeley Heights, New Jersey. Her major was Illustration. She entered Phi Sigma Pi in Spring 1999 with the Mu Class. She was co-chair of the Inter-Chapter Relations Committee her first semester as a brother, and then spent two semesters on the Historical Committee. MariAnne passed away in Spring 2001 while studying abroad in Florence, Italy. There is an olive tree planted in the gardens outside the Studio Arts building of the SU Florence center in her memory.

Beta Epsilon honors MariAnne by annually awarding a scholarship in her name.

The Spring 2011 initiation class will be the Alpha Nu class. 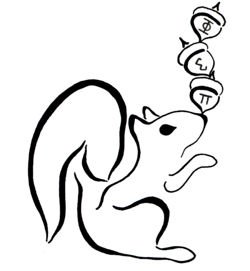 The Chapter mascot is The Black Squirrel

Here’s our chant and mighty song

And turn ya loose

Cause we’re the s**t from Syracuse!

Beta Epsilon celebrates its Founder's Day on or near the 7th of February with a weekend of events. Alumni, Brothers, and often Inter-Chapter Brothers come together in Syracuse and participate in service events and a banquet. At the banquet, the Alumnus of the Year award is given.

Beta Epsilon has a scholarship and an endowment fund in memory of MariAnne E. McDonald. The scholarship is given out either once a semester to a BE brother based on both a written essay and for demonstrating outstanding brotherhood.

The endowment fund provides a university scholarship to a Syracuse student majoring in Illustration. 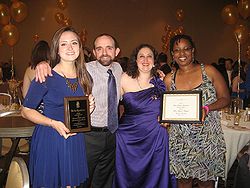