Epsilon Chapter (Founded 16 August 1928; Reactivated 19 April 2009) was founded at George Peabody College (now part of Vanderbilt University in Nashville, Tennessee) with the help of Alpha Chapter alumnus and National President, Rolla F. Wood, who was a graduate student of the college. The chapter went inactive in 1934. The Epsilon colony was refounded by Beta Psi Chapter alumnus Matt Peachey (ΒΨ 212, E 94) and is a member of the Bluegrass Region.

Epsilon is the second chapter to go inactive. Not much history remains from those early years, but some early alumni did leave Peabody College to become prominent members of the National Fraternity, including Beecher Flanagan who would go on to found Tau Chapter, one of the most historically successful chapters in the Fraternity. 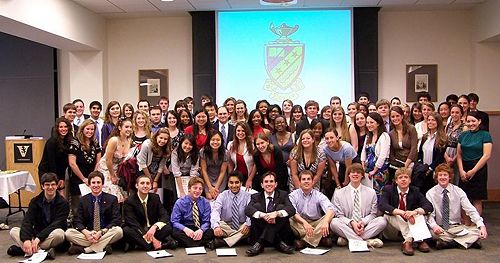 During a visit to National Headquarters in October 2008, Matt Peachey and Katie Peachey, two alumni from the Beta Psi Chapter at Middle Tennessee State University, spoke with Matt Parido, the Director of Expansion, about reactiviating the Epsilon Chapter at Vanderbilt after being inactive for over 75 years. Vanderbilt looked to be an exciting and promising addition to Phi Sigma Pi, so Parido asked expansion consultant Kate Rogers to help in establishing a colony there. Kate and the Peacheys (Matt being a medical resident at Vanderbilt) worked to send out over 5,000 invitation e-mails to the students of Vanderbilt. The initial info nights saw over 300 interested students come to hear more about Phi Sigma Pi. Kate led the colony's initial Pinning on February 8, 2009. The colony quickly established itself, led by the colony officers, Eric Walk, Colin Doberstein, Grace Appert, and Scott Floam. The initiates quickly learned about the fraternity and began to understand the principles of Phi Sigma Pi. They planned four events over the course of the semester to demonstrate their committment to the Tripod. Around the time of mid-terms, a psychologist gave a lecture on learning types of study skills to help the group maximize its study time. For fundraising, the initiates successfully solicited donations from parents and family members to help the chapter get a strong start to the semester. In addition, they organized a successful bake sale on the Vanderbilt campus with a few tasty leftovers for the "Gathering on the lawn" social where everyone was able to enjoy the Spring weather and each other's company. After a semester of work and study, 71 new brothers were inducted on April 19, 2009. The colony could then look forward to its first Grand Chapter in Louisville, KY and to rejoining the fraternity after its long absence.