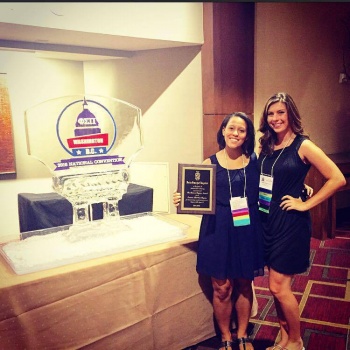 Beta Omega receiving their Steven A. DiGuiseppe Administrative Award at the 2011 National Convention.

Beta Omega Chapter (Founded 15 October 1995) is located at Eastern Illinois University in Charleston, Illinois. The Chapter is a member of the Upper Midwest Region. The chapter's mascot is a monkey named Bobo. The current chapter president is Andrea Polowinczak and the chapter advisor is Dr. Angela Beckman Anthony, a Beta Omega Alumna.

National recruitment took place at Eastern Illinois University in October 1995. The chapter started with 6 people and Jeremy Gibson (Beta Omega 1) served as the first president. The first advisor was Dr. Craig Eckert. Gibson was the only brother to return to the chapter in the fall of 1995. The recruiter at the time came back out to Charleston in February 1995 and initiated a class of approximately 80 people. Dr. Godson Obia became the chapter advisor.

The chapter thrived in numbers during its early years, sustaining a membership of approximately 80 brothers with probably a 30 male/50 female split.

Beta Omega celebrates the Chapter's founding the week of October 15.

This event is the day after formal.