In the Fall of 2007, Ryan Landoll began his first year of the University of Miami’s Graduate School program in Child Clinical Psychology. Landoll graduated from the University of North Carolina at Chapel Hill in Spring 2007 with a B.S. in Psychology and finished serving as President of the Alpha Kappa (UNC-CH) Chapter of Phi Sigma Pi. After entering the Graduate Program at UM, Ryan realized that there was something missing on the Coral Gables campus, and knowing how much he enjoyed Phi Sigma Pi, he wanted to bring together service organizations, Greek social organizations and honorary societies to undergraduates in a unique way. He quickly emailed the National Office of the fraternity in August and the process of the colonization of the chapter began with the Director of Expansion, Matt Parido. In January 2008 the first information sessions were held, and Landoll’s research advisor, Dr. Annette La Greca, was contacted as the potential chapter faculty advisor.

Unfortunately, due to complications with University regulations, there was difficulty arranging for recognition of the fraternity’s chapter because of a rule that does not allow outside individuals to be involved in the recognition process. Even after careful planning during the semester and the support of the National Office, the chapter was almost terminated before it ever truly started as a result of this disagreement with the University over compliance with their regulations on student organizations.

After a meeting with University officials, the Delta Lambda Chapter was able to have its first information session and had over 300 students turn out for the first meeting. However, due to the continued challenges associated with the recognition process, despite having over 70 students receive their pins in February 2008, the colony did not receive University recognition until March 2008 and the initiates were unable to meet on a regular basis during that first semester. Despite all of these setbacks, several students took the National Exam that Spring and would have been able to be inducted as Brothers had they fulfilled the National Office’s Charter requirements, which couldn’t be done because the University, while granting the chapter’s recognition had placed it on probation and had been unable to schedule the final step in the registration process.

In Fall of 2008, Landoll was able to convince the National Office to delay further recruitment until the future of the chapter could be finalized with the registration process at the University. After Dr. Greca was unable to continue as the faculty advisor due to the incredible demands and difficulties associated with the registration process, Landoll was able to secure another psychology professor, Dr. Heather Henderson, as the faculty advisor. Working throughout the Fall semester, Landoll, primarily by himself, but with the help and support of future Brothers including the first Parliamentarian, Marta Tobenas, Landoll was able to finalize the recognition process. However, by this time, recruitment was slower than what the previous year. At this time, one of the main goals in the recruitment process was to reconnect with those who had been involved the previous Spring. Those initiates who had completed the Initiation process in Spring 2008 completed the Ritual on Wednesday, February 18, 2009. Three Brothers were initiated that day, including our Chapter’s first President, Rebecca Greenfield, first Vice President Kimberly Espiritu, and first Initiation Advisor, Jennifer Kaplan. Brothers Daniel Cristancho and Lauren Bell completed the Ritual later in the semester. 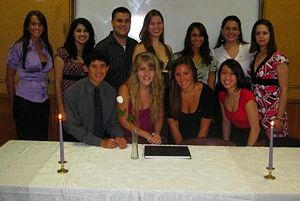 Matt Parido, the Director of Expansion, resigned from the National Office in March 2009 and the colony’s Regional Consultant, Ryan DeGuzman, became involved in helping the Delta Lambda chapter complete the Charter process. Due to the success of the regular meetings, the University removed the probationary status in the Spring of 2009. New initiates who joined in Spring 2009, along with Brothers inducted earlier in the semester, participated in the formal Ritual on April 28, 2009, signing the official Roll Book and becoming the complete Charter class of the Delta Lambda Chapter of Phi Sigma Pi in the company of National Office members and local alumni. In recognition of all of his efforts in the founding of the Chapter over the 2 year process of recruitment and recognition, Landoll signed as Delta Lambda 1, and the 11 Charter members signed their names right after.

In the 2010 Fall semester, the Delta Lambda Chapter initiated four more brothers (November 17, 2009) along with increasing the knowledge of the chapter’s existence at the University. As the word spread throughout the campus about this newly added fraternity many students became interested, and, at the Spring 2010 information sessions, over 200 students came to see how Phi Sigma Pi could change their experience at school and later on in the future as Brothers. Twenty-nine initiates became brothers on April 7, 2010.

The current chapter functions under the leadership of Alumni Advisor Ryan Landoll. Delta Lambda now has 36 members since its reactivation in 2009 and is continuing to grow.

Past Executive Boards and Committee Chairs

Delta Lambda has had numerous activities including a Beach Day and a Poker Night run by the Spring 2010 Initiate Class. Other activities the Delta Lambda Chapter has held include Family Olympics, Bake Sales, fundraising dinners at Buffalo Wild Wings, ICR events at other Southeast region chapters and Paws 4 You service events.