Delta Chi Chapter (Founded 3 December 2001) is located at Lehigh University in Bethlehem, Pa. The Chapter was founded with the help of Hoyt Craver, Director of Expansion, and Rich Freed, Chapter Advisor and Theta Chapter Alumnus, Alpha Eta Chapter Founder. Delta Chi was a member of the East Region.

After the discovery of an Alpha Eta, University of Delaware, alumni working in the Career Services Department of Lehigh University, Phi Sigma Pi Nationals decided to give those students with a 3.0 GPA or higher the opportunity to start a Lehigh University chapter of Phi Sigma Pi. Invites to an information session were sent out to these students on October 5, 2001. Of the hundreds of students who received these letters, some attended the first ever Lehigh University Phi Sigma Pi meet night held on Monday October 15, run by Nationals and Richard Freed, the Alpha Eta alumni who initiated the entire endeavor. Due to the interest generated, the staff arranged an organizational meeting for the next Monday, October 22. Many attended this meeting, including the National President, Tammy A. Mleziva. 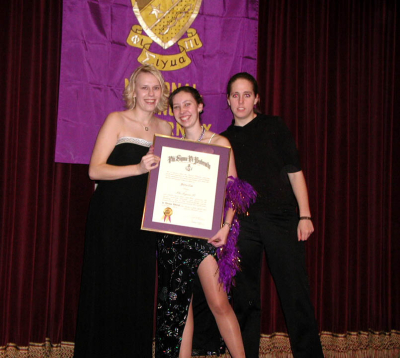 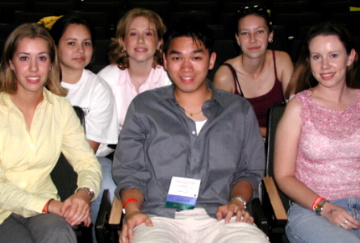 As they worked to become a chapter of Phi Sigma Pi, the group was named the Alpha class at Lehigh’s chapter and therefore needed to complete several requirements of the Phi Sigma Pi Tripod of Service, Social, and Scholarship; and the Delta Chi Chapter of Lehigh University was well on their way to doing that in November 2001. The first Monday of the month the chapter held a canned food drive and a pizza party before their official meeting, completing their requirements for service and social. At this same meeting, new bylaws and operating policies for the chapter were rising, as the chapter instilled policy that disciplinary action would be taken after three unexcused absences.

With all the fun of other activities, another requirement loomed amidst the group, the National Exam. In order to become a brother of Phi Sigma Pi, students must pass the National Exam, an exam testing the students knowledge about Phi Sigma Pi values, history, and present. To prepare for this exam in two weeks, the students involved took one quiz with questions similar to those on the exam on November 5, and then two more on November 12.

The exam date was set for November 26, but before that day, their fundraising and scholarship requirements still had to be completed. Fundraising was fulfilled with the producing and selling of Alpha class Phi Sigma Pi t-shirts, made for less than five dollars and sold at ten dollars to yield a profit and effectively fundraise for the chapter. In addition, candy canes would be sold from December 3-5. These shirts were completed and sold on November 19, the same day that the scholarship event was completed. Richard Freed, the chapter’s advisor, came to the chapter as a Career Services Speaker, and educated the group about topics such as resumes, job hunting, and interviewing. By the end of this chapter meeting, the class achieved the completion of all the requirements, except for the test the next week. In order to take the pressure off the test, a holiday party was planned for after the exam. That next Monday, November 26, 2001, the Alpha class of the Delta Chi Chapter of Phi Sigma Pi took the National Exam, and they all passed with over 80%. 36 brothers were inducted by the National Office into the Delta Chi Chapter on December 3, 2003, the founding day of the Delta Chi Chapter of Phi Sigma Pi, at Lehigh University.

Delta Chi Graduates Many Brothers and Gets a New Exec Board

The spring semester of 2002 came to a close at the end of April, and the Delta Chi Chapter of Phi Sigma Pi properly completed the semester with officer votes and awards. On April 22, the chapter gave Cheryl Foster, the founding president of the Delta Chi Chapter, the Most Valuable Brother Award and the following week they presented her with flowers for her hard work and dedication. All of the members of the E-Board, and honorary brother and faculty advisor Richard Freed also received gifts for their hard work as well. At this time, the old officers transitioned into the new officers: Justin Federici, President; Stella Maher, Vice President; Kevin Shephard, Corresponding Secretary; Katie Bex, Recording Secretary; Kristin Matchica, Treasurer; Rachel Zief, Rush Advisor; James Pontius, Initiate Advisor; Pam Passerello, Parliamentarian; Suzanne Ennis, Historian.

Although only one semester old, the chapter graduated 13 brothers at the end of this semester, and so it was a time filled with both the joy of becoming a real chapter, and the sadness of loosing so many brothers so soon.

Early in the fall semester the chapter lost their Corresponding Secretary, Recording Secretary, Treasurer, Initiate Advisor and Parliamentarian as the Chapter makeup shifted with those who were only there for resume building dropping off as the quality of the chapter was strengthened.

As a result of half of the executive board of the Delta Chi Chapter leaving, elections were held on September 2, 2002. Before the elections on this day, Stella Maher motioned to amend the Chapter Bylaws and combine the positions of Recording and Corresponding Secretary into on position of Secretary. The amendment passed. With this new amendment, only four positions had to be filled. Elections yielded Jeff Samuels as Secretary, Samuel Wallace as Treasurer, Mark Elloff as Initiate Advisor, and Suzanne Ennis as Parliamentarian.

Despite the recent problems with the executive board, the chapter started the semester with a scholarship event on the same day that the chapter instated the new officers. Guest speaker’s came from other chapters to speak about Phi Sigma Pi and the tripod and suggestions for strengthening the chapter. Within the next weeks, several social events were also planned and attended by brothers: bowling and a horror movie night.

Amidst the events, rush info sessions were held on September 16-18 and the first event was held on September 20, 2002: a very successful and well attended rush BBQ at a brother’s off campus home. Those rushing also participated in creating cards for sick children at St. Luke’s Hospital. For the final rush event, brother’s learned about those rushing through information sheets, conversation, and a canned food drive, held in the Ulrich Student Center on September 26 2002.

At the meeting on September 30, the brothers voted to pin all of the rushes. The Gamma Class were then pinned on October 1, 2002.

The current chapter has about 40 active brothers.

The chapter mascot is a crocodile named Nom Nom.

The chapter has two chants both were created in 2008. The main chapter chant is:

D-X
Delta Chi
We party down at old Lehigh
Screw the pong, we play Beirut
Get ready for the crocs' salute
Aaaaaaawwwwwww
FOR THE BROTHERHOOD!

The other chant is given is called "The Baker Corollary" in honor of its creator, Bill Baker. This is a call and response chant:


Brother: "Service in the streets!"
Everyone: "Scholars in the halls!"
Brother: "Mess with our Brothers..."
Everyone: "...and we'll kick you in the whaaaaaaa."

A required event in the chapter’s Operating Policy, Founder’s day is a very important event, and so planning for it began on November 17 2003, when the chapter was asked by Historian Rachel Mandeville if they would prefer to order food, or to have a potluck dinner for the celebration. The chapter decided to have a potluck, and so the list began to organize what everyone would make.

The dinner would be held at Sayre Lodge on December 3, 2003, the second birthday of the chapter. As it was a required event, 95% of the chapter attended and everyone enjoyed themselves, and the food, which ranged from soup to meatloaf to cookies and much more.

Delta Chi has since continued the tradition of holding a potluck dinner on its Founders Day.

Started in the fall of 2005, Delta Chi holds an annual kickball weekend. Brothers from nearby chapters come for the weekend events which include kickball and a service event.