Epsilon Sigma Chapter (Founded 16 November 2008) is located at The University of Iowa in Iowa City, Iowa. The Chapter was founded by Brother Michelle Kephart and is a member of the Upper Midwest Region. 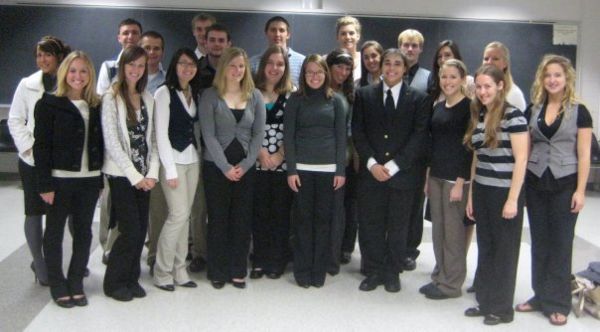 Epsilon Sigma Chapter was founded on November 16 2008. Chartering the Chapter was not an easy task, but it was a worthwhile bonding experience that helped the Charter to understand what Brotherhood is about. Epsilon Sigma received its charter at the 2009 National Convention in Louisville, KY. Brothers Rose Schmidt and Phil Hendricks attended the conference to accept the charter.

It Is Only The Beginning

The Epsilon Sigma Chapter faced many challenges in the first year, but it has came a long way in building Brotherly bonds within itself and other Chapters in the Central Region. Later, as the regions were reconfigured by the national organization, Epsilon Sigma became part of the Upper Midwest Region and was able to travel and interact more closely with other Brothers in the region. In 2009, Epsilon Sigma inducted its first class of initiates and began to grow the Chapter.

Epsilon Sigma has now been on campus for 5 years. We were awarded the Clarence O. Williams Most Improved New Chapter by National Council during the 2013 National Convention and our chapter couldn't be happier. We have had our fair share or struggles, but are overall making great strides towards becoming an important part of the Iowa City Community and a cohesive chapter with a strong sense of Brotherhood. We hosted the Regional Conference this year for the Upper Midwest Region with a Great Gatsby and Roaring 20's Theme. It was a hit! We were able to send two delegates to National Convention, while also raising money for ToGather Together, a local organization that donates free school supplies to students through the area schools. We had a research papers help continuous school supply drive during both spring and fall semester and asked all of the chapters in our region to bring supplies to our Regional Conference. It was a great success and plan to continue our partnership with ToGather Together. We donated multiple packages of pencils and pens, backpacks, notebooks, folders, markers, and other supplies. We hope to put together a 5K and "Fun Fair" that will benefit ToGather Together within the next year or two. We are all looking forward to what the future has in store for this chapter.

Our current membership consists of about 50 members with initiate classes ranging from 8-15 members per semester. We have seen a significant growth in interest during our rush week events and interview nights. Approximately 60+ qualified students attend our interview nights and we continue see growth from semester to semester. The turnouts for these events are allowing us to select stronger Brothers who have helped our chapter grow a great deal. We are extremely encouraged by the interest and recognition we have received both on campus and at a national level! We are also very proud of Brother Jenna Guy; she transferred to the University of Northern Iowa last year and recently received permission from them to start a chapter. We look forward to her chapter joining our region soon.

Past to Present Chapter Presidents