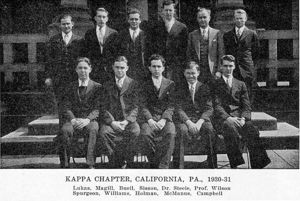 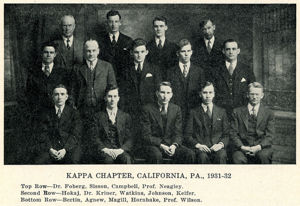 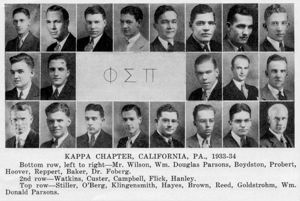 Kappa Chapter (Founded 2 May 1930; Reactivated 30 March 1988) is located at California University of Pennsylvania in California, Pennsylvania. The Chapter was founded by Chapter alumnus Name and is a member of the Western Pennsylvania Region.

Kappa Chapter was founded on May 2, 1930. The National President at the time, Dr. Percival, traveled from Indiana State Teachers College (now Indiana University of PA) to personally conduct the installation of the chapter and induct the new members. Assistants in the process were others from Indiana State Teachers College, Dr. Foster, Professor Manwiller, and Mr. Joseph Rudolph.

The high point of the social season at Kappa's found was the Founder's Day banquet held every May 2. This tradition of a celebration of our founding continues to this day at Kappa Chapter.

Kappa Chapter was reactivated on March 30, 1988 by Jeffrey Johnson and Steven A. DiGuiseppe. It was a mass reactivation with 160 new brothers signing the roll book on March 30, 1988. However, on April 11, 1988, 25 more Alpha class brothers signed Kappa Chapter's Roll Book, completing Alpha Class's members. Induction was completed one month before graduation, and, as a result, Kappa initially lost many of its Alpha A (A for reactivation) Class's brothers because there were no limitations in the recruitment process. However, with the new school year, Kappa Chapter was able to revitalize itself, and prosper to this day at California University of Pennsylvania. Since 1988, there have been 40 pledge classes to date, not counting the Fall of 88 when there was no pledge class.

Clair B. Wilson was a very instrumental faculty advisor for Kappa Chapter. (expand on this)

Kappa Chapter was the only chapter which remained active in 1945 during the second world war. 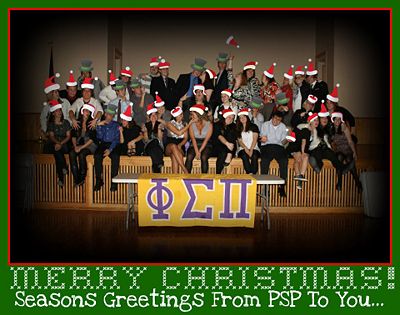 Kappa celebrates the Chapter's founding through an annual pig roast. This pig roast began its first year on the weekend of May 2-4, 2008 in California, PA. It is open to the entire brotherhood and is a weekend of full of scholarship, leadership and fellowship. Future plans for the Kappa Chapter Founder's Day weekend will continue annually. Please check the Kappa Website for more information on next year's celebration. 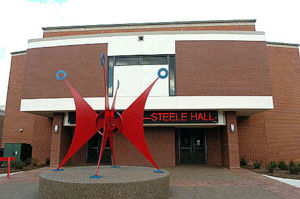 At California University of Pennsylvania, the Faculty Award has been renamed after Clair B. Wilson. In addition, Professor Wilson worked on the Staff of the faculty of the Psychology Department of CalU, giving much interest and attention to the subject of special education. Clair B. Wilson was also the faculty advisor for Kappa Chapter from 1930-1955. 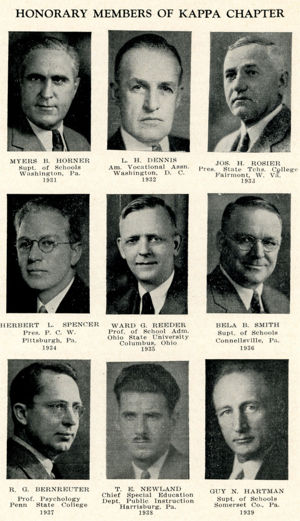 One year after being chartered, Kappa Chapter begins a process of inducting one honorary member per year. This person is typically an influential person in the field of education. They did not limit it to the local area as honorary members came from as far away as Ohio and Washington D. C.

first female Brother, inducted as an Honorary Brother prior to the fraternity allowing female Members
wife of Clair B. Wilson

Chief of Special Education, Department of Public Instruction at Harrisburg

President of California University of Pennsylvania