Alpha Iota Chapter (Founded 25 March 1990) is located at Montclair State University in Upper Montclair, New Jersey. The chapter was founded by Elizabeth Bernal (née Schwartz) and is a member of the East Region. 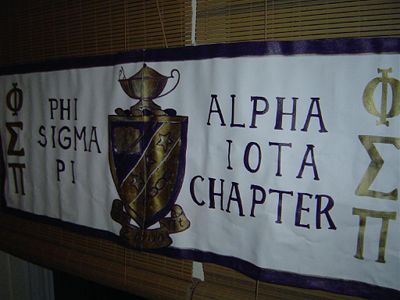 In spring 2005, the Chapter was down to approximately 15 members. With the help of the National Office and the Region Consultant at the time, the Chapter was able to pin 26 new Initiates for the Chapter's Alpha Zeta Class.

Due to Montclair State University regulations, the Alpha Iota Chapter is one of a handful of Phi Sigma Pi Chapters that are officially recognized as a Greek organization by Montclair State University's Greek Council. Phi Sigma Pi is classified as a "Professional Fraternity," along with similar honor or service fraternities chartered on campus. Alpha Iota Chapter's involvement with Greek Council has allowed the Chapter to be involved in campus-wide Greek social events, such as Greek Week. 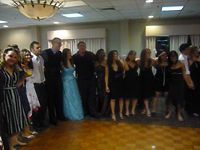 Alpha Iota celebrates the Chapter's founding with a Potluck Dinner on or around March 25. Brothers bring games, photo albums, videos, and more recently, a large model of the Alpha Iota family tree. Alumni are greatly encouraged to come to this event to remember and celebrate the past and future of the Alpha Iota Chapter.

Traditionally, the Chapter used to celebrate their annual formal on or around March 25, but in recent years, the Chapter moved the Formal to the end of the academic year to avoid conflicts such as Spring Break or mid-term exams. Since then, the Formal has been the de-facto Founder's Day celebration, although it is typically held late April. 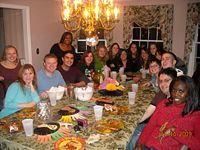 Every semester the Alpha Iota Chapter holds a potluck dinner or picnic for all of it's Alumni. Generally, the Potluck dinner is held in the fall as it is too cold for a picnic, and the picnic is held in the spring. While the picnic is generally held at Liberty State Park last year it was held at a Brothers house for a more private/personal feel. All Brothers participate by bringing food and supplies and treating the Alumni to show their appreciation.

The Alpha Iota Chapter mascot is Siggy the Penguin. Siggy is actually a real-life penguin; the Chapter used to regularly adopt this penguin from the Turtle Back Zoo in West Orange, NJ, as part of its service programming every year. The Alpha Iota Chapter tries to incorporate its mascot into various public relations materials, including rush placards and flyers. The Chapter has also, in the past, gone to the Turtle Back Zoo to visit Siggy as part of various scholarship or service projects.