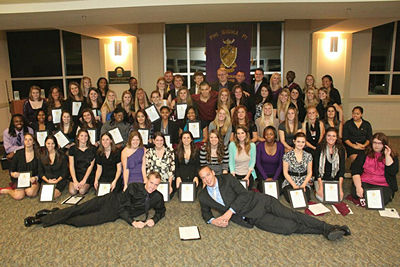 Zeta Xi Chapter (Founded 7 December 2011) is located at Coastal Carolina University in Conway, South Carolina. The chapter is a member of the Mid Atlantic Region.

The first major project undertaken by the Chapter was participation in the 2012 Relay for Life event held at CCU. The Chapter has a team every year and occasionally partners with other student organizations.

The Chapter usually celebrates its local Founders Day with a banquet-style dinner. Since all campus activities typically cease by the actual founding anniversary, the celebration is held late in the fall semester before the seventh of December. Superlative and major chapter awards, including the Chapter Service Key, are usually awarded during the ceremony. The Chapter previously hosted a banquet recognizing the National Fraternity's Founders Day.

The Chapter hosts an annual semi-formal dance during the spring semester. It has taken place at local venues such as Planet Hollywood, The Peanut Warehouse, Thompson Farm, Wild Wing Plantation, and Atalaya Castle in Huntington Beach State Park.