Gamma Eta Chapter (Founded 3 March 1996) is located at Florida State University in Tallahassee, Florida. The Chapter is a member of the Southeast Region.

In the Spring of 2008 Gamma Eta inducted it's Omega class, thus finishing the Greek Alphabet and restarted in the Fall of 2008 with the Alpha Alpha class (self-named the Awesome Awesome class).

In more recent years, Gamma Eta has been gaining greater recognition on the Florida State campus, and actively participates in campus events including FSU's Homecoming, Dance Marathon, and Relay for Life. Additionally, Gamma Eta has placed in their division for all of these events. 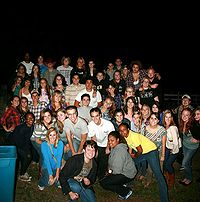 Each fall Gamma Eta hosts a Hayride weekend as an Alumni/ICR event. This event is usually takes place in October or early November. The weekend kicks off with a party to welcome our out-of-town guests, and also serves as a reunion party for our alumni. The following day the brothers participate in a service event and scholarship event. These events have ranged from park clean-ups to writing letters to soldiers, and from cooking classes to museum visits. The weekend culminates with nighttime trip to a local farm where the brothers gather around a bonfire, eat dinner, and roast marshmallows in anticipation of the night's big event: the Hayride (often accompanied by scary stories, told by the farm owners).

Family Olympics is an Alumni Event that has recently been held in the Spring Semester. It is held on a sunny weekend afternoon where the Hendricks, McClure, and Phillips Families compete to win the Family Olympics Cup! Games include team bonding activities and athletic events! The Hendricks Family won the 2014 Family Olympics held at Tom Brown Park!

Formal occurs every year in the Fall Semester. As a Fellowship Event, Brothers dress up and enjoy a nice meal at the Eagle Eye Country Club in Tallahassee, FL. Superlatives are given out for categories such as Best Big/Little, Most Likely to Become President, and Most Memorable!

Our Chapter works hard to fundraise and participate in Relay for Life at FSU! Each Spring, our Brothers raise money for the American Cancer Society and have fun engaging in the Relay for Life fundraisers and events. We can't wait to take part in this year's Relay for Life on April 10th, 2015!