Beta Iota Chapter (Founded 31 January 1994) is located at The Ohio State University in Columbus, Ohio. The Chapter was founded by its Alpha Class and is a member of the Buckeye Region.

Today, with over 70 members, Beta Iota is a strong chapter with a definite presence on Ohio State's campus. Its members put on great events every quarter, with recent events including a volleyball tournament and a trip to the nearby Ohio Historical Center. Beta Iota was proud to host the Great Lakes Regional Conference in February of 2008, which was attended by Brothers from all chapters in the Great Lakes region. The Brothers of Beta Iota also love to travel. During the 2008-2009 school year, members visited the Epsilon Iota, Gamma Theta, Gamma Epsilon, Gamma Chi, Tau and Alpha Beta Chapters and attended Grand Chapter and National Convention in Nashville and 2009 Great Lakes Regional Conference, hosted by the Beta Xi Chapter. They hope to visit more chapters in the upcoming year.

In the 2008-2009 year, Beta Iota also celebrated the 15th anniversary of its founding. The Chapter held a Quinceanera celebration in January to mark the actual day of its founding. Brothers were more excited about Phi Sigma Pi and their chapter than ever, and made the entire year a celebration. Beta Iota is looking forward to having another amazing year that will make the chapter even stronger!

On November 15, 2014, Beta Iota meet with the Epsilon Beta Chapter of Bowling Green State University to eat some delicious Mexican food and watch the Bowling Green vs Ohio State hockey game at the Schottenstein Center. For record sake Bowling Green won but OSU had won the game the night before. 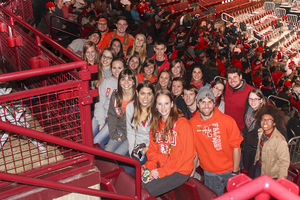 The 2014-2015 Beta Iota Executive Board consists of eighteen officer and committee chair positions:

Since the founding of Beta Iota, the chapter celebrates the 31st of January by having a weekend dedicated to Phi Sigma Pi activities where brothers are indulged in Leadership, Scholarship and Fellowship related activities.

The weekend usually begins on Friday night when Alumni and Inter-Chapter Brothers arrive and take part in a social activity. The next morning, a service event is usually planned for Brothers to participate in. On Saturday night, there is a formal banquet including dinner, an address from the chapter president, a photo slideshow, and dancing.

In 2009, Beta Iota celebrated its 15th annual Founders' Day by holding a Quinceneara-themed banquet and a weekend celebrating the Chapter's history with the help of Alumni and Brothers from other chapters.

End of the Semester Banquets 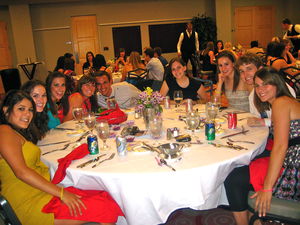 Brothers at the Spring 2011 Banquet 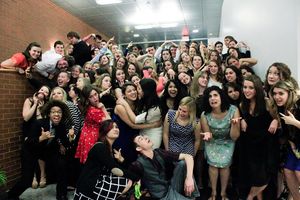 The Silly Side of Beta Iota, Spring Banquet 2014
At the end of each semester (formerly quarters) during the school year (Autumn and Spring), Beta Iota's Awards and Recognition Chair plans a banquet to celebrate before Brothers go home for break. At the banquets the new Initiate classes are inducted and welcomed into the Chapter. Graduating seniors are recognized at each banquet and presented with paddles and scrapbooks created by their fellow Brothers. Awards are also presented each quarter to the Brothers who best exemplified Scholarship, Leadership and Fellowship according to votes from their fellow members.