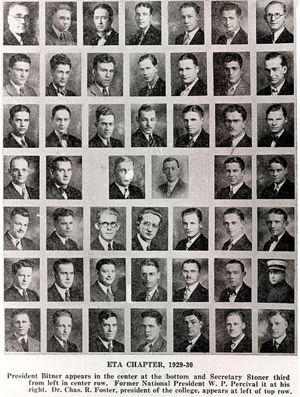 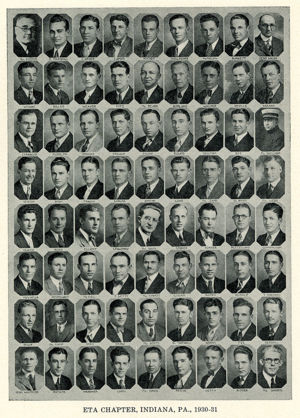 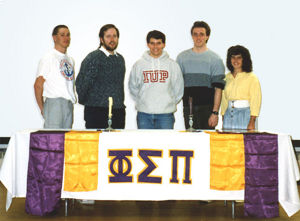 Eta Chapter (Founded 30 April 1929, reactivated 5 March 1989) is located at Indiana University of Pennsylvania in Indiana, Pennsylvania. The Chapter was founded by Walter Percival (Η 1) and is a member of the Western Pennsylvania Region.

IUP (Indiana University of Pennsylvania) was founded in 1875 as a normal school, a school that educates teachers. It became a liberal studies university in 1965. Now, there are three campuses (Indiana, Punxsutawney, and Kittaning). Three buildings on the main campus (Indiana) were named after Phi Sigma Pi Brothers: Foster, Walsh, and Wilson. Beard Auditorium, located in Stouffer Hall, is also a namesake of a Brother.

Eta Chapter was established on April 30, 1929, becoming the first fraternity on the IUP campus. The chapter forms from an already existing group on campus, Omega Chi Fraternity. The chapter's first group residence was on the 4th floor of the Indiana YMCA. On May 22, 1951, Eta's president, Joe Caletvi, asked Nationals to close the charter because Eta was not living up to the National Constitution.

In 1942 Phi Sigma Pi closed Eta Chapter due to the start of the war. In February 1946 members returned to campus and started the petition efforts to reactive their chapter. Ellwood Sheeder, past president, lead the reactivation efforts. Charles Tyger, John Feather, and Charles Stewart all helped work on the reactivation.

Eta was originally incorporated on August 2, 1948. The incorporation was set up to allow the chapter to purchase a house. The chapter originally had a house located at 413 College Street. 1

Eta Chapter was reactivated on March 5, 1989. It is the the only coed national honor fraternity at IUP. The chapter's philanothropy is the Muscular Dystrophy Association. The current chapter has 32 undergraduate members

Eta Chapter is recognized for starting the tradition of chapters holding Founder's Day events. In 1930 Eta reached out to the other chapters of Phi Sigma Pi and invited them to celebrate in their chapter's founding. The invite in part reads;

An annual affair that we are starting is the Founder's Day Banquet, to be held every April 30, commemorating our entrance into Phi Sigma Pi. Every year at this banquet, we intend to invite a widely-known figure in educational circles to address us and in the manner automatically making him an honorary member of our fraternity in the Eta chapter. This year our invitation to Dr. John Keith, Superintendent of Public Instruction in the State of Pennsylvania, has been accepted and we are expecting a fine address at the Founder's Day Banquet, April 30.

Other Events or Activities

For the Fall semester of 2009, we hope to bring back our "Balls to the Wall for Cancer" Wallyball Tournament, a campus-wide event which last year raised over $700 for the American Cancer Society. More information can be found at Eta Chapter's website- http://www.phisigmapi-eta.org!

There are five buildings on campus named in honor of chapter members;

Superintendent of Schools, City of Pittsburgh