Epsilon Theta Chapter (Founded 13 April 2007) is located at Georgia Institute of Technology (commonly known as Georgia Tech), in Atlanta, Georgia. The Chapter had over 40 Charter Brothers and is a member of the Mid South Region. 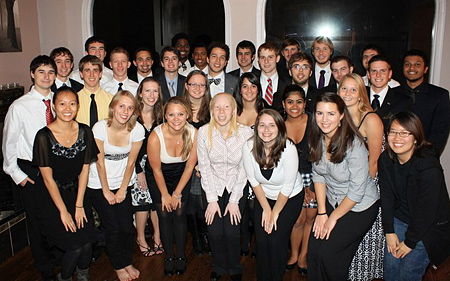 On September 26, 2006, the very first informational session was held at Georgia Tech by former Director of Expansion Colleen Donathan with the help of Brothers from the Beta Zeta and Gamma Delta Chapters. The info session attracted approximately 30 potential initiates that day (nicknamed Day One), including the Chapter's first Executive Board members: Angela Wang, Tom Fay, Keith Jones, Shreya Erramilli, David Rizzo, Sabrina Stanek, David Perner, and Daniyal Khan, as well as Faculty Advisor and Alumnus Nancy Gimbel and Alumni Advisor Sabrina Crawley. The Colony's first initiates were pinned a week later. Over the following two months the colony spent its time learning fraternity history and holding events such as a trivia night, bowling, and a potluck in order to meet the Brotherhood Education Program requirements to become a chapter. By the end of the Fall semester, the initiates had completed all of their requirements, however the colony's size had dwindled. It was then decided to continue the colonization process into the Spring 2007 semester in order to recruit more members.

The initiates returned to school in January of 2007 and elected its first Executive Board, in order to provide leadership and organization for the Colony's recruitment and initiate efforts. This proved successful when the Colony saw over 100 people attend its info sessions over three nights, with approximately 50 initiates pinned in early February. The Colony went on to raise $1000 through its fundraising efforts, as well as an additional $300 towards Teach For America by placing second in a school-wide kickball tournament. The initiates also held a game night and a zoo trip before the end of its initiation program in April. By then, participation had fluctuated somewhat, however it remained high enough for the Colony to proceed with induction.

On April 13th, at 7:05 pm (as dictated by a motion in the colony's last meeting), the Charter Class of the Epsilon Theta Chapter was inducted by Colleen Donathan, Emily Lodge, Michael Crawley, Sabrina Crawley, and Kyle Williams. Over 40 new Brothers signed the roll book the roll book that evening, including Honorary Brothers Michael and Sabrina Crawley. The fact that it was Friday the 13th did not deter the new Chapter, but instead led to the tagline, "Friday the 13th, but lucky for us!". 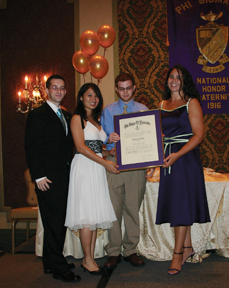 A few months later, Epsilon Theta received their charter at the 2007 National Convention in New Orleans, Louisiana. Brother Angela Wang was present as Grand Chapter delegate with Tom Fay as the alternate.

Epsilon Theta currently has a nine-member Executive Board. Its officers are elected at the end of the fall semester to serve in the following calendar year. Since many students at Georgia Tech co-op, intern, or study abroad in alternating semesters, the calendar year term was chosen to accommodate more members.

The Executive Board (or E-Board as it is sometimes referred to by the Chapter) contains one secretary who handles external correspondence such as forms as well as minutes and attendance. Epsilon Theta also utilizes a Recruitment Adviser, which acts to oversee all rush and recruitment efforts, and chairs the Recruitment Committee. 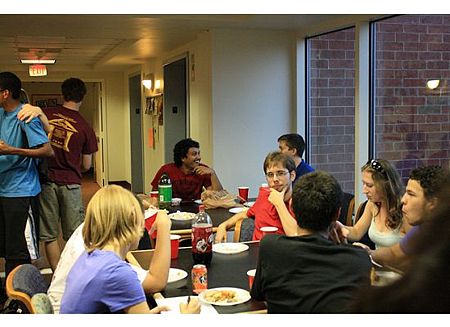 Brothers enjoying the spoils of competition

Each semester the Brothers of the Epsilon Theta Chapter compete for the title of "Iron Chef". The competition is fierce and each time the dishes get more delicious. The event is organized by the Scholarship Committee with the purpose of Brothers teaching fellow Brothers how to cook! Teams are selected ahead of the event as well as the announcement of the "Secret Ingredient" (this most recent semester was orange). Teams assemble before the event to concoct their dishes before heading to the competition arena. Once all teams are present the feast begins as everyone tastes all the dishes. After eating, participants vote on their favorite dish and the semester's reigning "Iron Chefs" are declared!

This year's event was coupled with a Leadership event. The Brothers of Epsilon Theta painted a picture for a nearby girls and boys club. 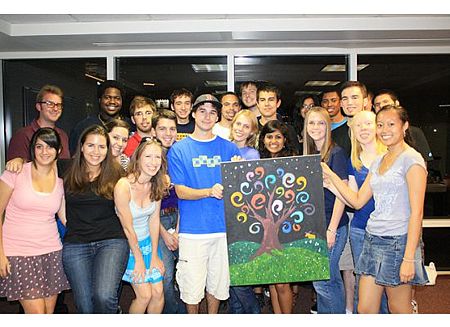 Brothers showing off their new masterpiece!