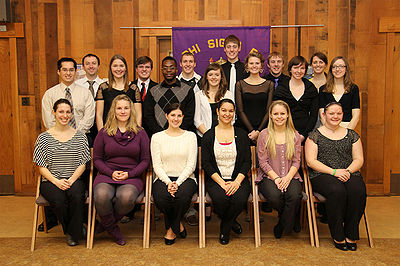 Zeta Phi Chapter (Founded 15 January 2013) is located at Iowa State University in Ames, Iowa, the chapter had 20 founding brothers. The chapter is a member of the Upper Midwest Region.

The Zeta Phi Chapter was founded by Ian Loomis and received their charter on January 15th 2013, after four semesters as a colony. The Alpha class of Zeta Phi had 20 brothers, although two were inducted post-graduation, leaving 18 brothers for the first semester as a chapter.

The first years of Zeta Phi have been a struggle, in addition to inducting four new brothers in the first semester, three brothers graduated and six more would resign from the chapter sighting busy workloads, this left Zeta Phi with 13 brothers for the first full year as a chapter. Zeta Phi struggled to recruit new members and in the Fall of 2013 inducted no new members, by the spring of 2014 the chapter had inducted three new brothers and were excited for the future. It was in this 2013-2014 school year that the Back to School BBQ and End of Year BBQ became regular events. The chapter also spent time this semester making sure the brothers were educated on what it meant to be a brother and that Zeta Phi could be more then just a resume builder.

Zeta Phi has had between 12 and 20 brothers for each semester so far with 14 this semester, the majority of whom are well involved in Phi Sigma Pi as well as other areas of college life, ranging from sports clubs, to social fraternities, to honor societies, to musical groups, ROTC and more. Despite the limited number of Brothers Zeta Phi still has a few events every year, in addition to smaller events that change from semester to semester,many of which can be read about in the Chapter Events and Activities section.

Zeta Phi has has a eight or nine position executive board, consisting of the President, Vice President, Secretary, Treasurer, Parliamentarian, Initiate/Recruitment Advisor, Historian, and ICR/Regional Delegate. The executive board is elected during the spring semester and serves from May to May.

Back to School BBQ

The first weekend of the Fall Semester the Zeta Phi Chapter gets together for a back to school BBQ. This event serves as a way to help ease brothers back into classes as well as chapter activities. The BBQ was held at Brookside Park in Ames, IA last year. At the BBQ brothers have a change to enjoy good food, good company, and have some fun.

End of the Year BBQ

At the end of the spring semester the Brothers of Zeta Phi get together for another BBQ. This BBQ is a celebration of another school year completed and as a goodbye for graduating seniors. The newest initiate class is also welcomed at this BBQ, and in years past the BBQ has been held after Induction. This BBQ, like the Back to School BBQ, is held at Brookside Park in Ames, IA.

In April of 2014 Zeta Phi and Eta Alpha held a joint formal at the University of Northern Iowa. The formal had a 007 theme, and was well attended by both chapters.

Project Linus has served as a service event for the Zeta Phi Chapter for a few semesters now. Project Linus is an organization headquatered in Bloomington, IL that strives to provide handmade blankets and afghans to children who are seriously ill, traumatized, or otherwise in need.