Alpha Phi Chapter (Founded 16 March 1992) is located at Eastern Michigan University in Ypsilanti, Michigan. The Chapter was founded by Chapter alumnus Name and is a member of the Great Lakes Region. 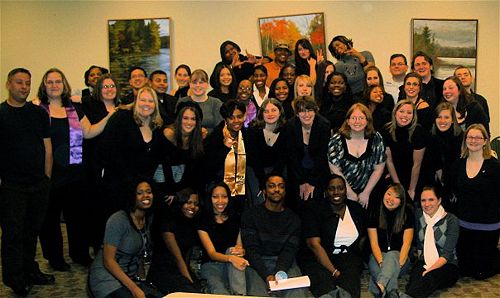 Alpha Phi Chapter, the first Chapter of Phi Sigma Pi founded in the state of Michigan, was chartered in the beginning of 1992 and was officially founded on March 16, 1992 with over 120 new members being inducted into the Alpha Phi Chapter that day. After induction, the brothers had their first social event which was a "graffiti party" where they signed each other t-shirts and took pictures.

Over the more than fifteen years since, Alpha Phi Chapter has inducted over 350 brothers, held numerous successful service, scholarship and leadership events throughout the region, including helping the homeless, running for Race for the Cure, (Relay for Life) assisting Teach For America, and much more. Alpha Phi has participated in Adopt-A-Highway cleanups at least twice a year since 2004, and remains committed to upholding the three ideals of Scholarship, Leadership, and Fellowship. While Alpha Phi has experienced many semesters of success, there have been some where the Chapter became disorganized and lost a significant percentage of its membership. The Chapter has endured many hardships and always prevailed. From 2002-2003, the Chapter emerged from a period of insufficient funding and unstable leadership and into an era of strong leadership and financial responsibility. The strains on bonds within the brotherhood that included scandal and drama were overcome and were brushed aside. From 1995-1999, the Chapter expanded and became one of the Top Ten Chapters in the Fraternity, receiving awards such as the C.H. McClure Single Service Award for a distinguished community service project at a homeless shelter.

128 Members were initially inducted into Alpha Phi's founding class on March 16th, 1992, when Alpha Phi the first Chapter was founded in the state of Michigan. Brothers of the Alpha Phi Chapter, including Kate Blatnik (Now Kate Holloway) helped to found Phi Sigma Pi's Chapter at Central Michigan in 1996 (Gamma Mu Chapter), and were present at the founding of all of the other Michigan Chapters: University of Michigan (Beta Alpha Chapter), Western Michigan (Gamma Rho Chapter), and Michigan State (Beta Sigma Chapter).

Because of the large initial size of the chapter, the list of the Charter members of the Alpha Phi Chapter may not be complete:

As the first Chapter in the state, Alpha Phi Chapter did not have an easy start. During the first semester following the foundation of the Chapter, only four new brothers were inducted during the Fall Semester of 1992, while numerous brothers dropped out of the Chapter. Indeed, even at the conclusion of the first semester of the Chapter's history, the number of active brothers had dwindled to less than 80. During most of the 1990s, the chapter's number of active brothers had stabilized at between 25-40 active brothers, a reflection on the relative smaller size of Eastern Michigan University's Campus. However, the ties of brotherhood have always remained strong throughout Alpha Phi's 17-year history, and the Chapter has received several National Awards throughout its history, including the C.H. McClure Single Service Award in 1996 for an outstanding service project.

As recently as the Fall 2006 Semester, the Alpha Phi Chapter had only 17 active members. Since that time, the Chapter has only continued to increase in size in steady spurts with each semester. At the conclusion of the Fall 2008 semester, the Alpha Phi Chapter had grown to 40 Active members for the first time in a decade. Fifteen new Brothers of the Alpha Iota Class were inducted. For more information about the active make-up of the Chapter, and other updates, please visit the chapter website at www.pspemu.org.

Alpha Phi Chapter honors Founder's Day every February as close to February 14th as possible. For more information on our Founder's Day presentations and breakfast, please visit the chapter website at www.pspemu.org, or the Chapter's postings on Facebook.

Our Chapter Sponsors many different causes, including our National organization's Philanthropy, Teach For America, such as Relay For Life, The Humane Society, Adopt-A-Highway, and more.