Gamma Zeta (Founded 25 February 1996) is located at Western Carolina University in Cullowhee, North Carolina, and is a member of the Mid South Region. 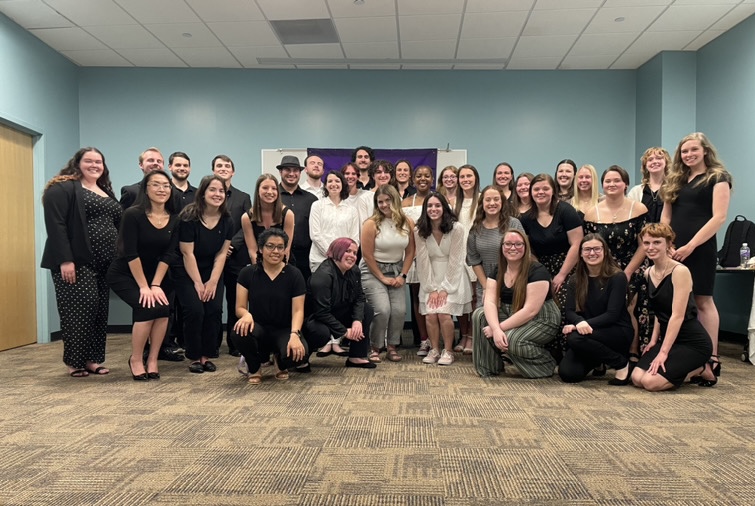 Gamma Zeta chapter of Phi Sigma Pi Honors Fraternity has been active for eighteen strong years. Founded on February 25th 1996, Gamma Zeta had grown to 21 active brothers and continues to grow and retain committed brothers through their intensive 9 week initiation period. The brotherhood's initiation program was strengthened due to the Fall 2013 Initiate Advisor Peter Peltack who, through his Assitant Initiate Advisor position under Initiate Advisor Abigail Smith, was able to better structure the general initiation program into the ideal program. Based upon Peltack's program and the continuation of it, Gamma Zeta was able to welcome in two strong initiate classes.

The chapter's strength was officially instilled through the improved initiation program, and Gamma Zeta's step to become more involved with the Regional Consultant occurred when Becca Bleich became regional delegate in the Fall of 2012 to the Spring of 2013. Becca was the first Regional Delegate to keep in contact with the regional consultant, Jessica Iroche and in the Spring of 2014, Alison Criscoe became the first regional delegate to attend a regional conference (along with Dakota Parker, Brittany Hester, and John Spiegelman).

In Fall of 2019, the chapter inducted one new initiate under the initiation program led by Initiate Adviser Caitlyn White and Assistant Initiate Advisor Lindsey White. During this semester, several positions on the executive board were filled, including the Parliamentarian (Elijah Taylor) and the Historian (Madison Welte). In the fall, the Epsilon XI chapter from Eastern Tennessee State University attended a tailgate before the WCU vs. ETSU football game, which led to bonding between the two chapters.

Kevin Rogers was the Chapter founder and President in Gamma Zeta's year of establishment, 1996. Kevin and his now wife, Sherry Rogers still live in the Western Carolina area with their two children, Zeb and Mimosa. The Gamma Zeta Chapter was founded on February 25, 1996.

In 1996 the Gamma Zeta Chapter of Phi Sigma Pi had their own floor in Western's old honors college residence hall, Reynolds. Brothers inhabited the 2nd floor which made it easy for everyone to plan events and meetings. Brothers who lived on the floor claim that their favorite aspect of the fraternity was coming back from class and spending time with their Brothers on the hall.

On February 14th of every year, the chapter wears business casual dress as well as pin attire to signify the national founding date of Phi Sigma Pi.

On the 14th of every month, the chapter wears business casual to signify the national founding date.

Past Events or Activities

The brothers in the past have hosted an event called Rent-a-Puppy which encourages students to "rent" puppies for 15 minutes for 5 dollars.

In the past, the chapter has held a service event called Bowls for Bovines. In this event we collaborate with the Western Carolina University ceramics students (the WCU Mudcats) to make and sell bowls to raise money for Heifer International. Heifer International is an organization whose goal is to help end world hunger and boost the economy in impoverished areas around the world. The money we raise from Bowls for Bovines goes directly to this organization to purchase a livestock animal for a family (or multiple families when we do really well!) in these areas. The chapter has also made a tradition of doing the annual Tuck River Clean-up every April, as they get to experience bonding as well as do service for the community of Sylva, Dillsboro, and Cullowhee, North Carolina. This event is organized every year to clean up trash and do recycling on a section of the Tuckasegee River, then properly dispose of the litter collected. The chapter goes as a group and then splits off into different rafts to complete the cleanup. For service events in the past, the chapter has created cards for children's homes, nursing homes, and various other places in the chapter's local area. The chapter has also completed community garden workdays in the Cullowhee community garden in the fall semesters as well as in the late spring weather permitting.

For social events in the past, the chapter has done a variety of events. To support the chapter's university, social events have taken the form of going to basketball, football, and baseball games as a group. The chapter has also held several tailgating events, with one happening in Fall of 2019 that the Epsilon Xi chapter from East Tennessee State University attending as well, before going to the WCU vs. ETSU football game.

Brother of the Semester Recipients (First Awarded in 2003)

Brother of the Year Recipients (First Awarded in 2009)