Alpha Sigma Chapter (Founded 4 November 1991; Reactivated 20 April 1998) is located at Virginia Commonwealth University in Richmond, Virginia. The chapter was refounded by Alpha Kappa Chapter alumnus Rebecca "Becky" Halloran and is a member of the Dominion Region.

The Alpha Sigma Brotherhood as of Spring 2010

In the spring of 1997, Alpha Kappa Chapter alumna, Rebecca Halloran, moved to Richmond and was informed that the Alpha Sigma Chapter at Virginia Commonwealth University had been inactive since 1993. Wanting to bring the spirit of Phi Sigma Pi back to VCU, Halloran began the process of re-activating the chapter.

The process the Alpha Sigma Chapter re-activated was much more involved than Halloran had expected. Since she was not affiliated with VCU as a student or employee, getting lists of potential brothers proved to be difficult. Even with a comprehensive list of all students maintaining a 3.0 GPA; all graduate students, first semester-freshman and second semester seniors had to be weeded out of consideration.

On March 23, 1998, the first of several organizational meetings was held in the University Commons Theatre. On March 30, 1998, the first group of officers for the reactivated Alpha Sigma was elected. The elections were like pulling teeth since many were unsure of what they were getting into with the fraternity, much less jumping right into a leadership position.

Finally on April 20, the Charter class of the reactivated Alpha Sigma was inducted after taking the membership exam. The induction ceremony was the first official ceremony for the new Alpha Sigma. Rebecca and several visiting brothers from Alpha Kappa performed the induction ceremony for the Charter class of 33 new Brothers and welcomed them to the Phi Sigma Pi circle of Brotherhood with the fraternity grip, greeting, and song.

The Chapter currently has 65 Brothers, all of whom are active in Phi Sigma Pi and other campus organizations from athletics to honor societies to service groups.

The Chapter colors are purple, gold, and white.

The Chapter mascot is Siggy the frog.

At the beginning of meetings the entire Chapter stands to sing "Brothers Are We" and yell...

Alpha Sigma currently has a ten position executive board which meets every week before regular business and initiate meetings. Officers are elected each spring to serve the fraternity during the following academic year, with the exception of the Initiate Advisor, who has been elected on a semester to semester basis since 2008. In 2006, due to the dwindling size of the Chapter and need to re-energize the recruitment process the Chapter split the Recruitment Advisor office into a co-chair position. In 2008, this action was modified to create two separate positions: Recruitment Advisor and Public Relations Advisor, to boost the chapters presence on campus. In 2009, the number of members on the executive board became ten, when the of Brother-at-Large was added to help open lines of communication between Brothers, a position inspired by similar officers at other chapters in the region. 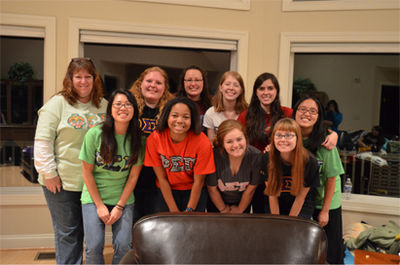 Alpha Sigma celebrates the National Fraternity's founding with a Brotherhood Dinner and the Chapter's re-activation with a Formal Dance, service event and fellowship festivities with Brothers, Alumni and other Chapters.

The Alpha Sigma Chapter has recently begun developing a relationship with the campus sport/concert venue the Alltel Pavilion at the Stuart C. Siegel Center. Every semester the Brothers work a concession stand inside the stadium and serve customers hot dogs and popcorn, while showing their Phi Sigma Pi pride and being Rowdy Rams cheering on the VCU teams.

The Brothers also frequently work at Diversity Thrift, a local thrift shop that supports the Richmond Gay Community Foundation- an organization dedicated to improving the lives of lesbian, gay, bisexual, and transgendered people through funding and education. Brothers work for a fraction of the cost of part-time employees, thereby conducting a service for the store and making a little profit while we're at it!

Alpha Sigma's most recent service chair has set up a system of themed service events for the semester, to give the Chapter a service focus and direction. The Fall 2007 semester hosted events focusing on the impacts of poverty with events like:

The biggest event thus far has been a Stockings For Soldiers drive to gifts overseas and adopt a stateside family with a parent deployed for Christmas. In 2007,The Chapter chose to adopt a family in Reaford, NC, with four children from ages 7 to 15 and a father currently serving in Afghanistan. The Brothers graciously donated to a Family Gift Fund to buy the children one big present- a Nintendo Wii! When advertised on campus, students, alumni, and faculty donated everything from Chapstick and sunscreen to Kool-Aid and magazines to send in the holiday carepackages to Iraq. Due to the immense positve response of the Brotherhood and the campus community, the Chapter is considering making this an annual service event.

Alpha Sigma takes extreme pride in their urban location and the immense cultural diversity on campus. The Chapter celebrates this demographic with a variety of Scholarship field trips to events, including:

The Alpha Sigma Chapter recognizes the importance of all three foundations for the tripod including socializing! The Chapter works to host events throughout the semester to give Brothers an excuse to take a step away from the books and bring friends to hang out with the Brotherhood for a good old dose of fun. This semester the Chapter has focused on stress relieving events like late night milkshake runs, movie dates, stress management nights and dancing (gotta love those endorphins)!

Author of the Chapter Chant